Norway comprises the western part of Scandinavia in Northern Europe. 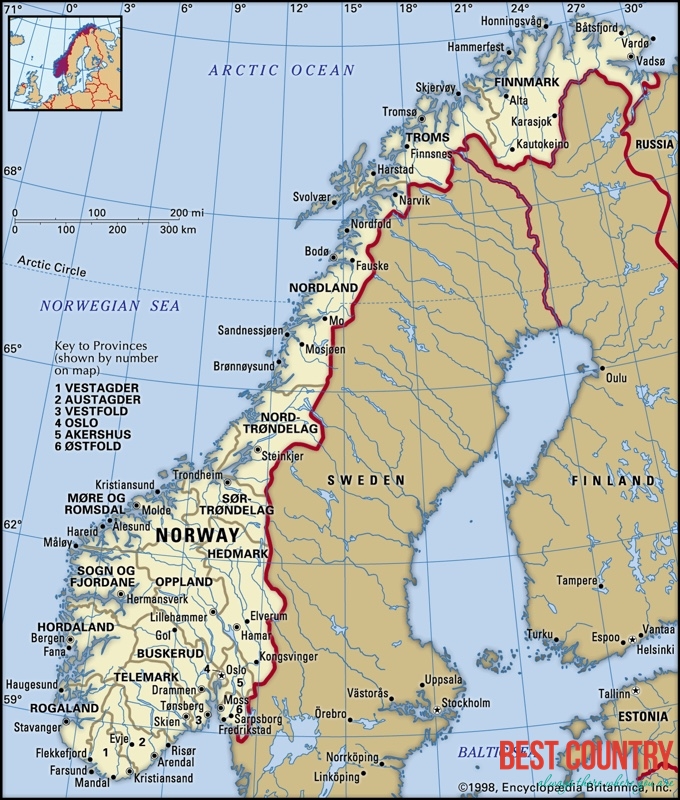 At 385,252 square kilometres (148,747 sq mi) (including Svalbard and Jan Mayen), (and 323,802 square kilometres (125,021 sq mi) without) much of the country is dominated by mountainous or high terrain, with a great variety of natural features caused by prehistoric glaciers and varied topography. The most noticeable of these are the fjords: deep grooves cut into the land flooded by the sea following the end of the Ice Age. The longest is Sognefjorden at 204 kilometres (127 mi). Sognefjorden is the world's second deepest fjord, and the world's longest. Hornindalsvatnet is the deepest lake in all Europe. Frozen ground all year can be found in the higher mountain areas and in the interior of Finnmark county. Numerous glaciers are found in Norway.

The land is mostly made of hard granite and gneiss rock, but slate, sandstone and limestone are also common, and the lowest elevations contain marine deposits. Because of the Gulf Stream and prevailing westerlies, Norway experiences higher temperatures and more precipitation than expected at such northern latitudes, especially along the coast. The mainland experiences four distinct seasons, with colder winters and less precipitation inland. The northernmost part has a mostly maritime Subarctic climate, while Svalbard has an Arctic tundra climate.

Because of the large latitudinal range of the country and the varied topography and climate, Norway has a larger number of different habitats than almost any other European country. There are approximately 60,000 species in Norway and adjacent waters (excluding bacteria and virus). The Norwegian Shelf large marine ecosystem is considered highly productive.