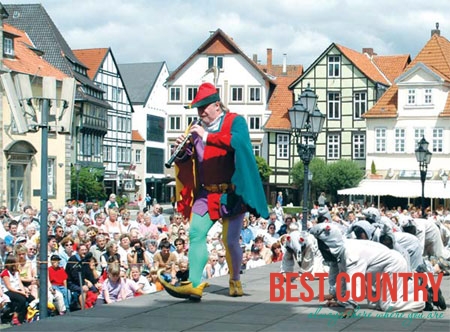 Germany has been remarkably called the "land of poets and thinkers". The culture in Germany is quite diverse due to varied history of people in Germany.

The Germanic tribe dates back to the Nordic Bronze Age or just before the Roman Iron Age.

The Carolingian Empire or the Holy Roman Empire of the German Nation, the Hapsburg Monarchy, and the Kingdom of Prussia are some of the major ruling dynasties who ruled Germany at different point of time. Bismarck and Hitler are some of the notable German heroes.

Being an integral part of the First World War, Germany lost the war. Following this, Germany saw the rise of Hitler and the Nazi power.

After the much inevitable Second World War, Germany was divided only to be re-unified in 1990. Soon it became a member of the European Union.

Culturally, Germany has been known for its contribution in many fields like music, literature, philosophy, art and architecture, and sports.

German Art: Germany has produced some of the best pieces of art work and has a long tradition in visual arts.

Hans Holbein the Younger, and Matthias Grunewald were the major Renaissance artists. Print making, wood engravings and Gothic art of the sixteenth century are some of the major German innovations.

Architecture: The Carolingian and Ottonian styles, the precursors of Romanesque contributed to the architectural styles of Germany.

Music: One of the leading music markets in the world, Germany is home to some of the most well-known classical music composers, including Ludwig van Beethoven, Johann Sebastian Bach, Johannes Brahms, and Richard Wagner.

Literature: German literature is world-famous and dates back to the Middle Ages.

Johann Wolfgang von Goethe and Friedrich Schiller, Thomas Mann, Bertolt Brecht, and Hermann Hesse are some of the most renowned German authors. Germany hosts the Frankfurt Book Fair annually; it is the biggest book fair in the world.

One of the leading motor sports countries in the world, Germany is known for the manufacture of motor brands such as BMW and Mercedes.