In Germany, preparations for Christmas begin before December falls. But the real celebration starts from 6th December, St. Nicholas Day, known here as "Nikolaustag". On the night of 5th December (St. Nicholas Eve) children put their shoe or boot outside the door, a tradition practiced in many other European countries.

According to a German legend, the spirit of St. Nicholas, the patron saint of children, goes from house to house on this night carrying a book of sins in which all the actions of the year of all children are written. 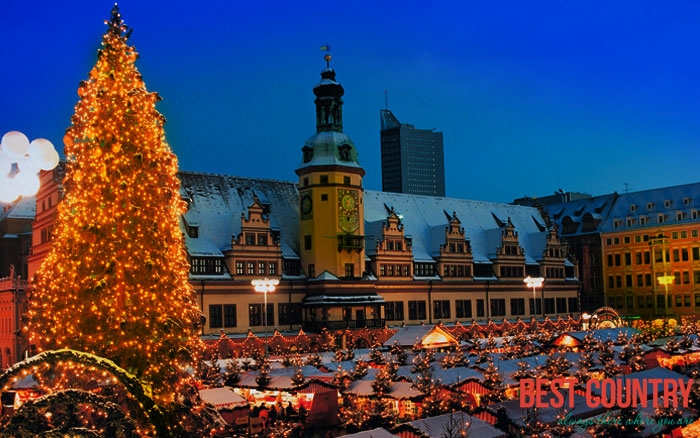 During Advent, advent wreaths (made of Holly flowers) are placed on a table and four red candles are placed in the center of it. One of these candles is lit on each Sunday preceding Christmas and the last one is lighted on Christmas Eve.

Advent calendars, containing pictures beneath each window, are used by kids to count the days until Christmas.

A unique aspect of the German Christmas decorations is that, kids can not take part in the beautification of the Christmas tree. It is believed that the tree has some mysterious spell for all young eyes that rest on it before Christmas Eve.

Hence, the Christmas tree is decorated on Christmas Eve, prior to the evening feast. The father usually keeps the children in a seperate room while the mother brings out the Christmas tree from a hidden place and decorates it with apples, candy, nuts, cookies, cars, trains, angels, tinsel, family treasures and candles or lights.

The gifts are kept under the tree. Nearby, beautiful plates are laid for each family member and filled with fruits, nuts, marzipan, chocolate and biscuits. The decorations finished, a bell is rung as a signal for the children to enter the room.

The Christmas story is usually read during this time and carols are sung. Often, sparklers are lit and gifts opened too.

The Christmas Eve is popularly called here as "Dickbauch" (meaning "fat stomach") because of the myth that those who do not eat well on Christmas Eve will be haunted by demons during the night. So everyone tries to stuff their belly to the fullest on this day.

From the beginning of Advent, booths and stalls are set up on the market-places in all cities where you can buy everything you need for Christmas: decorations for the tree and candles, crib figures and gingerbread (which is mainly baked and consumed at Christmas), Christmas trees, and presents for Christmas Eve.

Walking through such a market really is an exceptional experience. Children enjoy this most of all. The smell of fir resin and roasted almonds intermingle.

Then there are all the lights from the stalls and the little stoves where sausages are fried and chestnuts roasted.

Songs and the sounds of music fill the air. The most famous Christkindlmarkt takes place in Nuremberg and attracts lots of visitors every year.

While children in Canada have Christmas parades to assure that Santa is on the way, in Germany the magic of Christmas starts with the December arrival of the advent calendar. Advent starts on the first Sunday after November 26th.

This time is devoted to preparations for Christmas. After the four Advent Sundays are over, there follow Christmas Eve and Christmas Day. Advent calendars with their bright Christmas pictures hang alongside children's beds.

If you look more closely, you discover small numbers in this picture. One, two, three, and so on up to 24. Wherever the numbers are, there are small paper windows. When you open these windows you find a little picture on transparent paper: a candle, a ball, a snowman-whatever children like.

The children open a new window every morning, and then they know that there are still twenty three days to Christmas, twenty two, twenty one, and so on. Every day Christmas Eve, so much longed for and charged with wishes, comes a little closer.

Apart from the Advent calendar, families also have an Advent wreath. The wreath is made of bound fir twigs to which foucandles are attached. One more candle is lit for each of the Advent Sundays. In large houses, shops, and in churches, these Advent wreaths hang from the ceiling, adorned with four fat red or yellow candles.

This looks particularly splendid when the wreath is also decorated with red or violet ribbons. No one knows when the Advent wreath came to Germany and where it originated. It does not date back very far as a Christmas Custom but has already firmly established itself.

Before the first Sunday in Advent you will see many, many Advent wreath in flower shops and nurseries. Pine and fir cones, little red mushrooms, or red and yellow ribbons are also attached to the green of the wreath.

The undisputed focal-point of the entire Christmas period, in the community and in the family, is the Christmas tree. A German Christmas without the green fir tree is simply inconceivable. The tranquil splendor of Christmas tree lights is an essential aspect of the festival for both the individual and the population as a whole.

It is the symbol of Christmas for all Germans, who have to have their Christmas tree on December the 23th (not a day before!) even if they live abroad in distant countries. Trees are also found in churches and public squares. They are used in shops as decoration, and in offices to please staff and visitors.

The giant trees that stand in public are especially grown for this purpose and carefully looked after in municipal wood. They are often up to 25 metres. Decorating the treeIn earlier times, candles were perhaps enough in the eyes of children and adults. Today everyone wants a well-decorated tree in their home.

You can even say that there have been areas-such as Rhinish Hesse and the Spessart-where the sweets on the tree have been more important than the lights. People there spoke of a Sugar Tree rather than a Christmas tree, and this was hung with edibles and decorations. Some families with children maintain this custom up to the present day.

Christmas is a time for singing and music making. There is a constant mention at Christmas of the mysterious sounds of bells and other musical instruments, present in all households. This starts with the first Sunday in Advent and reaches its peek on Christmas Eve, the Holy Evening, when the silent night should be filled with sounds that seem to come from celestial spheres.

The most famous of all German language Christmas songs , "Stille Nacht! Heilige Nacht! was first heard during Christmas 1818 at the small church of St. Nicholas in Oberndorf (Austria), which is near Salzburg and the German-Austrian border. The writer of the text, Joseph Mohr, was assistant priest from 1817 to 1819.

Franz Yaver Gruber, the composer, had been the teacher and organist at nearby Arnsdorf since 1807, and he also filled the latter function at Oberndorf, when no one was available. Just before Christmas 1818, Mohr suggested to Gruber that they should produce a new song for the festival.

On the 24th of December he gave the musician his six verse text, leaving only a few hours till the moment the song was due to be presented. The organist's melody pleased the poet though, and the song was performed with great success. Today this famous song is translated into 44 other languages and is known all over the world.

Xmas feast:
It is said that the tradition of serving boar's head at the Christmas feast originated because the German god Frey, who was responsible for the well-being of livestock, was symbolized by the boar. Therefore boar was often sacrificed in hopes of a prosperous spring herd.

Eventually, the boar's head custom as a part of German Christmas feasting became impractical. Boars were increasingly hard to find and dangerous to catch. It also took a week of cooling and preparation to make the boar presentable. In more modern times, the boar was replaced by pork, roast beef, turkey, and goose.