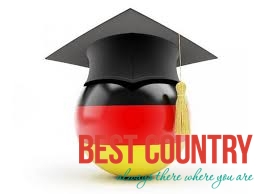 Germany, a land of innovation, invention and ideas is the most preferred destination for foreign students. International standards in education, science and research play a central role in making the country one of the knowledge hubs of Europe. The country has one of the world's best and most extensive school and university systems.

Internationally recognized qualifications and comparatively lower costs of education are the two key factors that allure students from all corners of the world. Some people are better suited to a traditional classroom-based education, while others may gain from vocational training or on-the-job training coupled with classroom instructions.

The education system in Germany is fashioned in such a manner that it can address the needs of a wide and varied population.

German citizen the right to self-fulfillment. Thus, theoretically, citizens can choose the type of education they prefer and have access to their preferred occupation or profession. The aim of the country's educational policy is to provide an atmosphere for its citizens to grow intellectually, personally and professionally.

Almost all elementary and secondary schools and about 95 percent of higher education institutions are public.

Education is the second largest item of public spending after social security and welfare and in 1990-91 this expenditure amounted to 4 percent of GNP .

Since 1949 the federal government , the Lander and the local governments, including, some districts have shared the burden of financing education.

According to the Basic Law, the responsibility of education lies on the Lander. Article 30 clearly establishes the autonomy of the Lander in most educational and cultural matters, including the financing of education, the maintenance of schools, teacher training, the setting of teachers' qualifications and educational standards, and the development of standardized curricula. In higher, or tertiary, education, they share responsibility with the federal government.

The roots of the German education system go back to the Middle Ages when church schools were established. The first university was founded in 1386 in Heidelberg followed by the ones established in Cologne, Leipzig, Freiburg , etc. These universities trained only a small group of intellectual elites.

In the 16th century, the Reformation led to the establishment of universities along narrow sectarian lines. But by eighteenth century, elementary schools had been separated from the influence of churches and had come under the direction of state authorities.

Wilhelm von Humboldt (1767-1835), a scholar from Berlin may be credited with a host of reforms that have shaped the German education system . He proposed university-level training for high school teachers and modernized and modified the structure as well as the curriculum of the Gymnasium or the preparatory school.

He wanted an orientation phase after the Gymnasium and a qualifying examination known as the Abitur for admissions to university. In 1810 he founded a university in Berlin.

He also introduced the three principles of academic freedom, unity of teaching and research, and self-government by the professors that guided German universities. Similarly, Friedrich Froebel brought about many modifications at the kindergarten level in 1837.

In 1957, Council of Education was established to serve as an advisory committee for the entire education system.

As per the Basic Law or the Constitution , the education system in Germany is the responsibility of the individual state governments. Thus, German universities and institutes are run by the individual federal states.

The Federal Ministry of Education and Research (BMBF)is the body in charge of educational planning , research promotion and the entire system of higher learning. It acts as a sponsor for young academics, talented persons and also for the exchange programs for trainees, students and academics.

Universities in Germany have also opened up their portals for new and innovative means of learning.

Introduction of E-learning is an initiative in this direction as it opens up avenues of entirely new opportunities to schools, universities, research facilities, business and industry. This “electronically-supported learning” utilises the benefits of different multimedia technologies, and specially the Internet .

This makes learning easy, fast, and above all free from the dimensions of place and time.

German schools cater to the needs of providing a good standard of basic learning to all the students. They provide for nine years of compulsory education to all children, without any discrimination. The concept of compulsory education was introduced in Germany as early as in 1659, in the state of Bavaria .
In 1717, it was introduced for the first time in Prussia also. This provision protects children from all forms of social discrimination and isolation and brings about their integration across all sections of the society.

This free and compulsory education is a significant aspect of German democratic set-up as it gives an equal chance to even the socially disadvantaged classes to seek knowledge.

German schools are based on a pattern where at the age of six, children start attending a primary school, and after four years, they move on to a variety of secondary schools like Hauptschule, Realschule, Gymnasium, etc. There are also Gesamtschulen, in which all children of compulsory school age are taught in parallel classes, depending on their individual abilities.

They move from one stream to another depending on their level of learning. In Hauptschulen, grades 5 to 9 are compulsory, and 10th grade is voluntary. Realschule covers grades 5 to 10 and is halfway between Hauptschule and a Gymnasium.

The children leave with a “Mittlere Reife” certificate. Gymnasium provides in-depth education and students graduate from Gymnasium after the 12th or 13th grade with a High-School Certificate.

A Standing Conference of the Ministers of Education and Cultural Affairs of the Länder coordinates the policies related to schooling, as each Federal state has its own laws for schools.

In 1995, it were the Germans who made the dream of MP3 player become a reality. A team at the Fraunhofer Institute , under Karlheinz Brandenburg, developed this method of audio compression.

The country also has to its credit a total of 76 Nobel Prize winners till date, 65 of whom have won the prize for their contributions to the natural sciences or medicine.