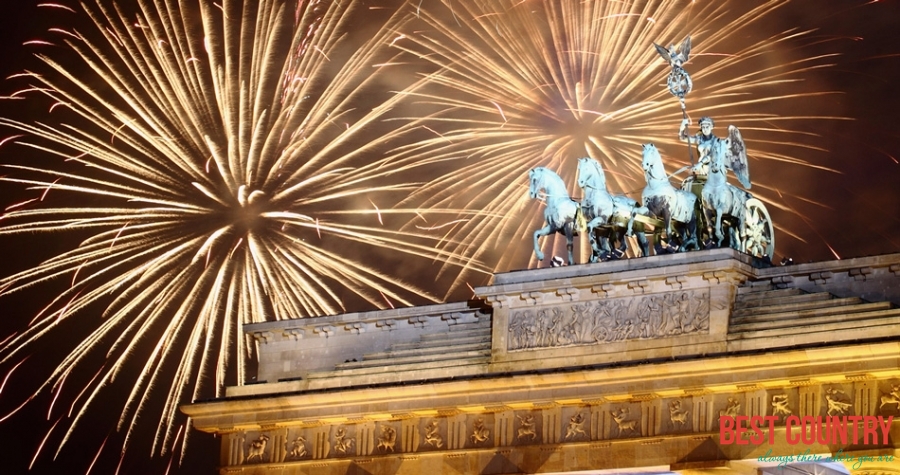 Nuejahr or New Year in Germany is celebrated on January 1 as per the Gregorian Calendar. People bid farewell to the old year and welcome the New Year in a rocking manner. They eat, drink, dance, play games, exchange wishes and even make resolutions to bring in the New Year.

With the New Year celebrations, people of Germany do not forget to follow all their customs and traditions. A very popular tradition of telling future called Bleigiessen is followed with great amount of excitement by the Germans. They would drop molten lead into cold water and predict future of people from whatever shape it created. If it took the shape of a heart or ring it meant wedding, shape of ship meant journey and a pig symbolized plenty of food in the coming year. Another tradition of leaving a bit of every food on new Year's Eve until after midnight ensured surplus food year ahead.

New Year's Eve is a noisy affair. These celebrations are all about dancing, singing, drinking and having a lavish meal. People like to spend time with their dear ones. Party places and restaurants are overcrowded with people. The huge New Year bash of Brandenburger Tor in Berlin is famous worldwide.

As soon as clock strikes 12 at night, people are seen hugging, kissing and wishing each other "Gutes Nue Jahr" or "Happy New Year". Bells of churches start ringing loudly. Champagne and wine flow lavishly and fireworks light up the sky. Thus, New Year is welcomed in a merry way by the people of Germany.

Playing special New Year games is another feature of New Year's celebrations. At homes, people enjoy the festive craze by watching special New Year programs. It is considered very auspicious by the people to have carp (a type of fish) or herring and toast made with champagne or sekt. Cabbage and carrots are also eaten to bring in financial stability. For Silvester, lentil (or split pea) soup with wieners is very popular. It is prepared a few days before the New Year. People also share meat and cheese fondue with family and friends as the New Year feast.