The country can be divided into four main river basins: 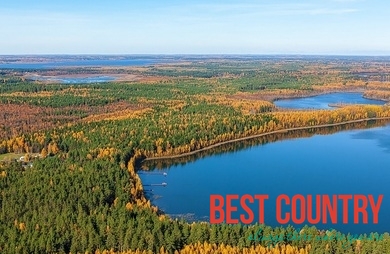 - The Dnepr basin. This basin covers about 81.5% of the country. The Dnepr River rises in the Russian Federation and enters Belarus in the northeast.

Within the country it flows to the south and, after forming the border with Ukraine over some 100 km, it flows into Ukraine and finally the Black Sea.

It then flows to the west and leaves the country in the northwest to flow into Latvia, where it is called the Daugava, flowing to the Baltic Sea.

- The Neman basin. This basin covers about 6% of the country. Its main source is in the centre of the country near the capital Minsk.

It flows to the west and enters Lithuania, where it is called the Nemunas River, which flows to the Baltic Sea. The Vilija River, also rising in Belarus to the north of the Neman River, flows west into Lithunania, where it becomes the Neris River that flows into the Nemunas River. Some smaller tributaries rise in Poland and flow east into Belarus into the Neman River.

- The Western Bug basin. This basin covers about 2.5% of the country in the southwest. The main Bug River rises in Ukraine, and forms the border, first between Ukraine and Poland and then between Belarus and Poland, before entering Poland.

The largest lake is Lake Naroch, with an area of 80 km2 and an average depth of 9 m. There are also about 1 550 small and shallow natural ponds in the country with a total area of 350 km2 and a total capacity of 0.5 km3.

There are 140 dams and tanks each with a capacity of at least 1 million m3, of which 89 have been built for irrigation purposes. Their total capacity is estimated at 3.08 km3 and their total surface area about 880 km2.

The gross theoretical hydropower potential of Belarus is estimated at 7 500 GWh/year, a third of which being economically feasible. Hydropower installed capacity is only 6 MW, generating 0.06% of electricity of the country.

Since 1992, some agreements with Poland have been reached on water quality issues and navigation on the Western Bug River. However, no agreements exist with neighbouring countries on the sharing of water of international rivers.