Holidays and traditional celebrations in Belarus

Before 990 A.D. belarusians (several eastern slavic and baltic tribes, mostly Kryvichi and their branches, Jatviags, Lits) were pagans. They believed in the God of Sun - Yaryla, celebrated seasons of nature according to sun and moon calendar. The cycles of folk songs that were sang at these celebrations still exist. 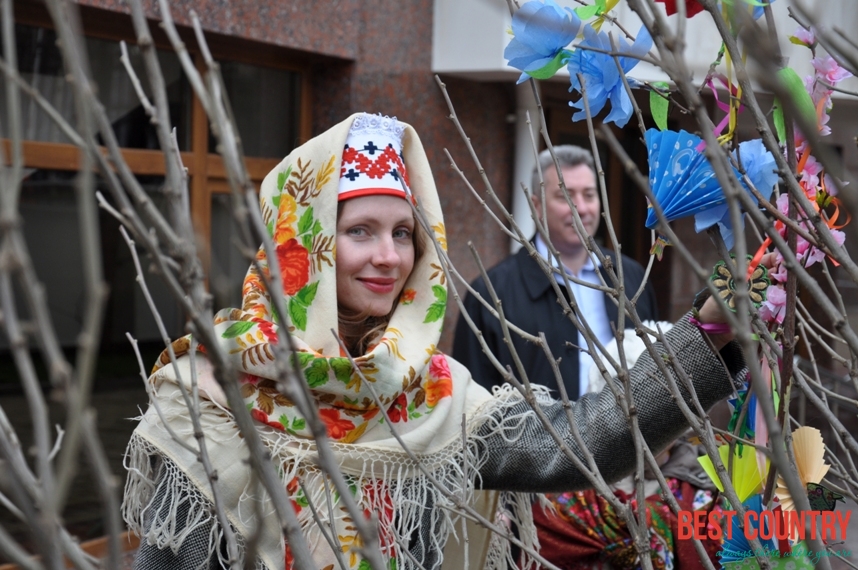 "Spring Greeting"- is a cycle of celebrations designed to "awake' mother Earth from the winter sleep which was important for such agricultural people as belarusians.

This cycle includes such holidays as "Maslenitsa", "Vialikdzen'" (Easter), "Yur'ya" and others.Each celebration is characterized by specific cycles of "vesnavyia" (spring) songs. The most ancient celebration is "Yur'ia".

Yur'ia is in fact christianized name for pagan God-Sun - Yaryla. The typical ritual on Yur'ia (reflected in "yur'iauskiia" songs is calling for Yaryla (Yur'ya), the Sun-God, to bring out the keys and open his mothers (Earth, Nature) womb - to let out the grass, and flowers, and animals.

As usual these holidays are also celebrated by specific ritual food - eggs (symbol of life in most of indo-european cultures), pancakes (circle is an important magical shape - it depicts sun).

Kupalle (Solstace, June 21) - is the most loved and charished pagan holiday in contemporary Belarus.

The tradition is very ancient. Under different names this holiday is celebrated by all peoples of indo-european group.

During the summer Solstice, Yaryla (God-Sun) was reaching its biggest power. Kupalle - is a gedonistic summer celebration of the lands fertillity in the name of a female God - Kupala.

It seems like she is considered a lunar Goddess by some pagan sources, although direct translation of the name is "She Who Bathes". Lately it was renamed into a christian celebration of a male saint - Ivan Kupala.

There is a whole complex of traditional rituals, beliefs, love and agricultural magic. Supposedly in ancient times Kupalle was celebrated in the night from July 6 to July 7. During the day of July 6 young girls were going into the meadows to collect different "kupal'skiia" (made on Kupalle) plants and remedies - corn flower, ferns, etc.

It was considered that the plants gathered at this time have particular strengths for curing and magic. Part of these plants were used in food.

Some plants were used for magical protection and the wreaths of these plants were put on the walls of the houses to protect against bad spirits.

Some of the plants were used in the "kupal'skiia" wreaths which were weared on the head by young men and women durin Kupalle celebration. Here is more of the description of Kupalle celebration among ancient eastern slavs from the Saint Petersburg's Naturist Society.

The central part in Kupalle celebration was a fire. This fire was symbolizing life and Yaryla, and was expelling deathj. During the day young men would prepare the place to start ther fire. They would go around the village collecting old things - clothes, broken barrels - and would take them out to the chosen for festivity place.

Usually it would be a meadow, a forest glade, a bank of a river. Guys would. Then later the youth would go around the village calling with their special Kupalle songs for the celebration.

Special ritual food was cooked on the fire - fried eggs (egg symbolized both sun and life), kulaha (a sort of a puding made of wheat powder), vareniki (dumplings stuffed with berries - blueberries, cherries, raspberies). The oiled wooden wheel would be set on fire to symbolize sun.

Kupalle usually involves youth going into the forests and the meadows, wearing flower and grass garlands and wreaths on their heads (see this modern picture of Katia on Kupala night). There will be many rituals ofl purification practiced - jumping through the fire, bathing in the river or rolling in the grass dew.

There would be a lot of dancing in karagods, competing in strength. A popular type of magic practiced on Kupalle night was fortune telling. The girls would put their wreaths on the water and let the river carry them.

The one that would come to the bank or get entangled with another mean that there will be a marriage.

Also it was believed that if you pick the leaf of plantain growing at the crossroads and put it under the pillow - you are verylikely to dream your future spouse on Kupalle night. One could burn a bunch of flux plants in Kupalle fire and chant:"Flux, give birth", to increase its crops.

It was believed once in a year on Kupalle night near the midnight the fern has a glowing flower - "Paparac'-kvetka".

The lucky couple that would find it would live happily and would be able to foresee the future. It was believed that on Kupalle night rivers are glowing with a special light, trees can speak in the human language and even walk from place to place. It was believed that the Sunset on Kupalle night is special. The Sun sets down "playing" - dividing into concentric circles that expand and contract. 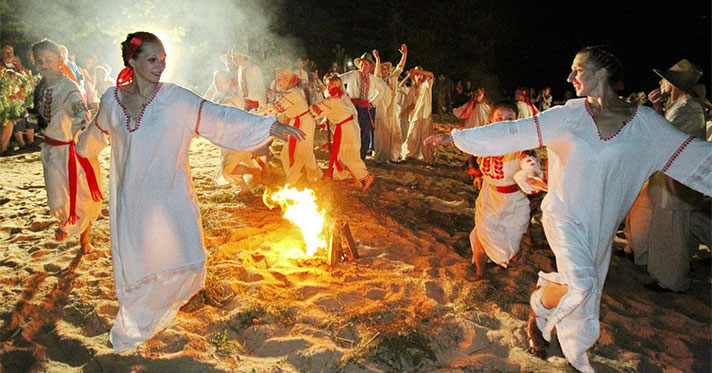 It was also believed that the witches could spoil things on this night. Different ways to protect yourself and your household were used. You could put garlands of special plants that have magical protective properties on the outside of your house. You can put into your rye burning coals from Kupalle fire.

Of course the hands of working women were protected by red ornament on the sleves. Sometimes to be completely safe you have to drive all your cattle through the purifying Kupalle fire. The purifying power of Kupalle fire was so believed that people would dry out on it the shirts of the sick to cure them, or bring little children close to it to expell all bad spirits.

For those interested, you can watch a documentary "Night on Ivan Kupala" to learn more. Also here are some notes about celebration of Kupalle by ukrainians in Canada.

Dzyady - prechristian celebration originating from the cult of ancestors. It is a ritual dinner (a sort of wake) for commemoration of the dead relatives. Usually "Dziady" is also called the day on which the ritual is performed and the same name is used for the commemorated dead persons.

Dziady was celebrated during particular days 3-4 times a year (depends on the region). The main Dziady were "asianiny" - on the first Saturday preceeding St. Dzmitry day (October 26).Also Dziady were celebrated in early spring on "radaunitsa", "maslenitsa" and "siomuha".

The special ritual food is cooked for Dziady dinner - "kyccia" (fine barley porridge with berries), "bliny" (pancakes), fried eggs, meat. According to the tradition part of the food and drink is left in a special plate and glass for the dead.

At this day families are going to the graveyards to take care of the graves. Sometimes the have food by the grave. Then it is customary to pour some vodka on a grave. Unlike Haloween it's a light holiday of commemoration of dead. It does not involve any blood, fake teeth and other satanic stuff. 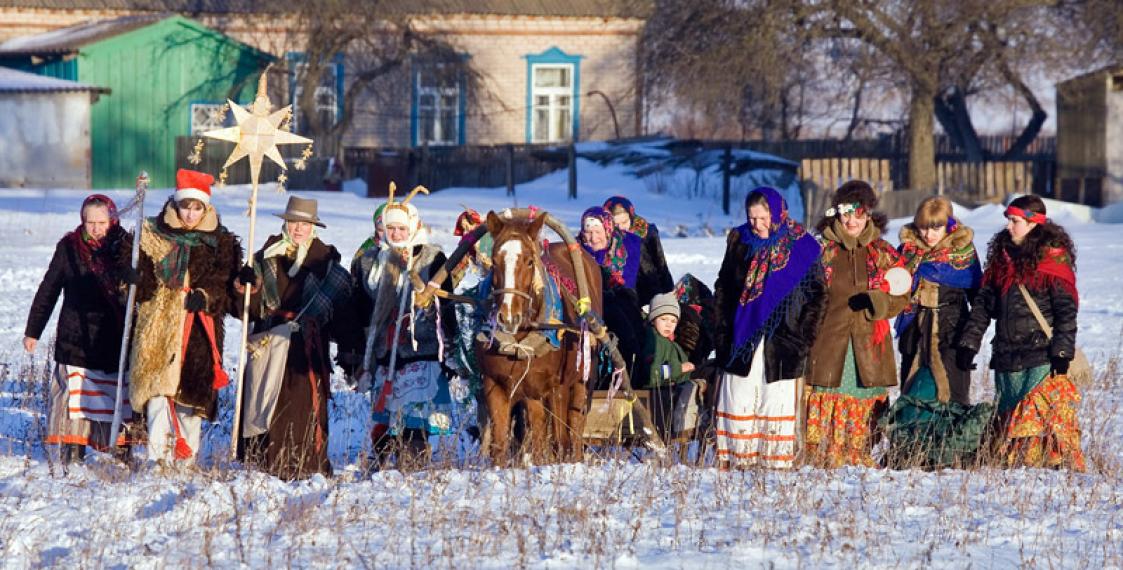 Kaliady (December 25 - January 7) - prechristian celebration of the end of year. It comes from Latin "Calendae", which is the name for the first day of each month. Another version of the origin of the word is the word "Kola" (the wheel) which is related tothe turn of the year.

In the annual cycle of folk rituals and celebrations this holiday was the beginning. Later it was very nicely adopted for Christmas celebration by Orthodox and Catholic churches. Sine the Catholic Christmas is on December 25 and the Orthodox Christmas is on January 5 - Kaliady are now celebrated between these two dates.

The ritual food was cooked for three ritual dinners: "posnaia viachera"(Engl.: fasting dinner) with no meat or fat in the beginning, "toustaia"(Engl.: fat) or "miasnaia" (Engl.: "meat") dinner with meat, eggs and sweets on New Year Eve and the last one - "halodnaia" (Engl.: hungry) or "vadzianaia" (Engl.: watery) at the end of Kaliady. During Kaliady there were a lot of fun going on.

Folks would dress themselves as animals and fantastic beasts, carry the sun and the goat's head on a stick and visit different houses trick-or-treating. They would sing special Kaliady carrols in which the performers greet the house owners, wish them success and plentitude. The youth were playing games, perform in folk theatre plays for public, "skamarohs" would entertain the crowd, play jokes on people.