Andorra - A thousand years of culture 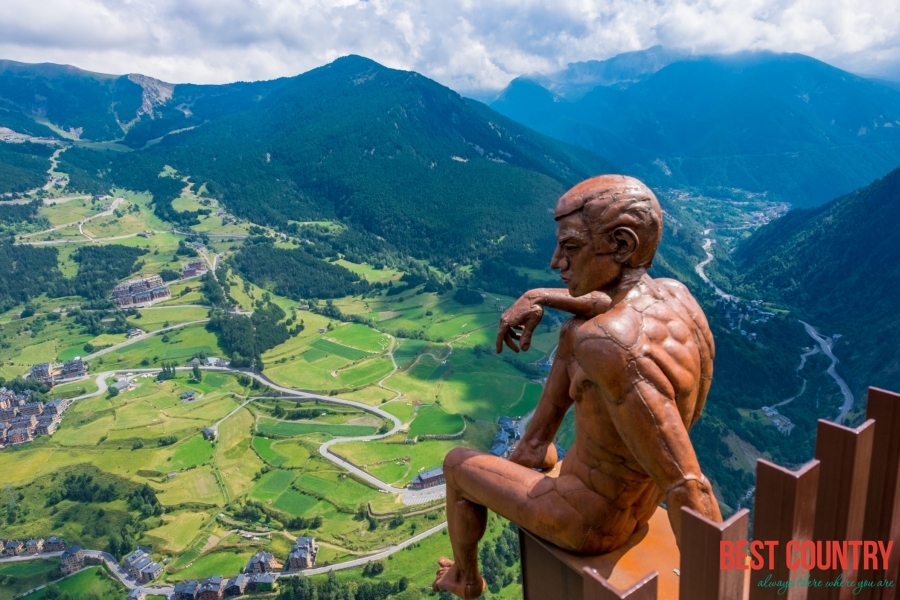 More than a thousand years of history underlie the architectural, cultural and popular heritage of Andorra. The Romanesque treasures hidden in the Principality bear witness to its origins and traditions. Here, art lives side-by-side with nature, traditional culture, and modern artistic events.

Andorra is a synonym for Romanesque art. There are 40 churches in its valleys, as well as medieval bridges.

The most noteworthy churches are Santa Coloma (Andorra la Vella, 9th and 10th centuries), one of the oldest and one of the few with a circular bell-tower, which in this case is from the 12th century, and the church of Sant Miquel d’Engolasters (Escaldes-Engordany, 12th century), which has a 17.5m belltower.

The wall paintings and baroque altarpieces of Sant Climent de Pal (11th and 12th centuries) and those of the church of Sant Martí de l Cortinada (12th century) in Ordino are also of great importance.

The Casa de la Vall, the Santuari de Meritxell, and the typical villages of Pal and Ordino are other sights not to be missed. The Casa de la Vall, a traditional home of the nobility, with Gothic frescoes reproducing scenes from the Passion of Christ, was built at the end of the 16th century.

This is now the seat of Parliament, having until recently housed the Courts. The Meritxell Sanctuary was rebuilt in 1976 by the architect Ricard Bofill, beside a 17th century church which was destroyed by fire.

À Andorra also has many museums. In the Art Center of Escaldes-Engordany you can visit the museum of Romanesque Art Models, displaying 30 monuments on a reduced scale, and the Museu Viladomat, which has 250 works by the famous sculptor.

The old Reig tobacco factory in Sant Julià de Lòria houses the tobacco museum. This is an outstanding display of the Andorran tobacco tradition, explaining the most closely-guarded secrets of tobacco manufacture in the 20th century.

The Museu Nacional de l’Automòbil at Encamp is a must for all motor fans, with an extensive collection of 90 cars, 50 motorbikes and 100 bicycles from the period 1898 to 1998.

In the same town, the Museu Sacre de Sant Eulàlia has a collection of liturgical gold and silver objects. In addition, Ordino has the Museu Siadristyi de la Miniatura, the Museu Iconogràfic Sant Jordi i Cristianisme, an outstanding display of religious art, and also the Museu Postal and the Museu del Pin, located at Ansalonga (Ordino).

Finally, we recommend a visit to the old traditional houses: the Casa Cristo, dating from 1885 (Encamp), the Casa Rull at Sispony (La Massana), and the Casa d’Areny-Plandolit (Ordino), which are part of the rural habitat trail.

The last two are from the 17th century and can be visited free of charge on the first Sunday of each month. The Farga Rossell forge at La Massana is also a must. On the 18th May, the Principality celebrates International Museums Day.

The land of a thousand fragrances

Discover the essences of perfumes, create one of your own or explore a thousand years of seduction and glamour at the recently-opened Museu del Perfum Fundació Júlia Bonet.

With this museum at Escaldes-Engordany, the Principality of Andorra completes its cultural offer and becomes the land of a thousand fragrances. This is a tribute to the commercial and perfume traditions of a country with a total of 109 perfumeries in just 468 km².
Recreational and cultural trails for all

The Principality of Andorra has a total of eleven routes. “El camí a França” (the road to France) runs from the Meritxell Sanctuary to the villages of Canillo. “Entre l’ahir I l’avui”, (between yesterday and today), is a route to Encamp.

“Les valls silencioses” (the silent valleys) runs from Ordino to L’Arieja. The “Racons inoblidables” (unforgettable places) goes to La Massana. “El cor que batega” (the beating heart) is a route to Andorra la Vella and Santa Coloma. “Pas a l’art” (the art path) runs from Sant Julià de Lòria to Aixovall, and the “la font de cultura” (fountain of culture) is a route from Escaldes-Engordany to Engolasters.

Some different trails look at iron, taking routes via the Farga Rossell, the path from Arans to Llorts, to the Casa Areny-Plandolit and Santa Martí de la Cortinada.

On the road from Arans to Llorts are contemporary paintings showing the iron tradition in Andorra; and in the village of Llorts itself are mines where the mineral was originally mined. On the other hand, the rural habitat itinerary includes a visit to three country homes, now converted into a museum, and also the sun and shade route and lower areas in Escaldes-Engordany.

Music plays an important role in Andorra, as can be seen by the range of events held in the Principality.

Another international event is the Andorra la Vella music and dance season, which takes place from November to May and has seen outstanding performances from, among others, pianist Evgeny Kissin and Ainhoa Arteta. In November, Escaldes-Engordany holds the Premi Principat d’Andorra international piano competition.

The musical tradition of this Pyrenean country is highlighted with performances by the Orquestra Nacional de Cambra d’Andorra and the Cor Nacional dels Petits Cantors d’Andorra, the Principality’s best exponents of classical music.

Finally, the theatre season that takes place from October to February in Andorra la Vella stands out due to its high artistic quality.

At Andorran festivals and other cultural events, the Esbart Santa Anna, the Esbart San Romà and the Esbart Lauredià interpret some of these typical dances and offer a spectacle that reflects the uses and customs of mountain life and in which international contemporary dance is combined.

There are many popular traditions and festivals coinciding with celebrations of a religious nature and the natural cycles of the earth.

There is the Aplec de Canòlic in May, the Roser d’Ordino in July, the Diada de Meritxell, celebrating the patron saint of Andorra, on 8th September, and the Fira d’Andorra la Vella in October.