Although small in land mass, Andorra experiences a multitude of climate types, that vary greatly and according to elevation. Andorra’s valleys have a climate similar to that of neighbouring Spain and France, yet because of their higher elevation humidity levels are significantly lower, the winters more severe and the summers cooler.

The northern valleys are almost hidden beneath a thick layer of snow for several months and the regions above the Alpine tree line that stand at 2100-2400 m above sea level experience alpine and alpine tundra types of climate.

However sunny days are rather large in number, averaging about 300 days per year. Average daily peak insolation varies from 1150 W/m2 in June to 280 W/m2 in December.

The average annual temperature fluctuates greatly from one area to another.

The country as a whole receives an average annual precipitation of 1071.9 mm, although its levels vary sharply between regions. As general rule precipitation levels fluctuate according to elevation, increasing from south to north.

Sant Julià de Lòria is Andorra’s driest region with an annual precipitation average of 800 mm and Canillo in the north is the wettest receiving 1100 mm per year. Also the highest mountainous areas of Andorra can receive above1220 mm of precipitation per year. 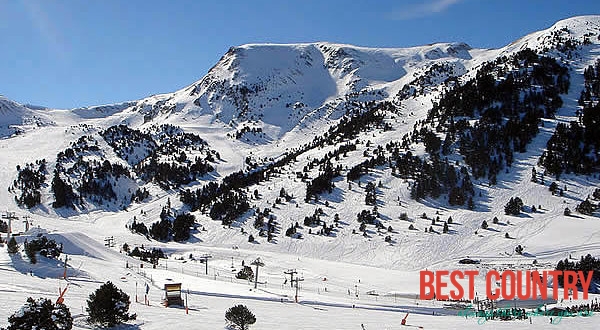 The months winter months of January and February tend to be the driest and May, June and September the wettest. Although during the summer the fine weather is only infrequently interrupted by rainy spell, the rainfalls it experiences are usually heavy and associated with thunderstorms.