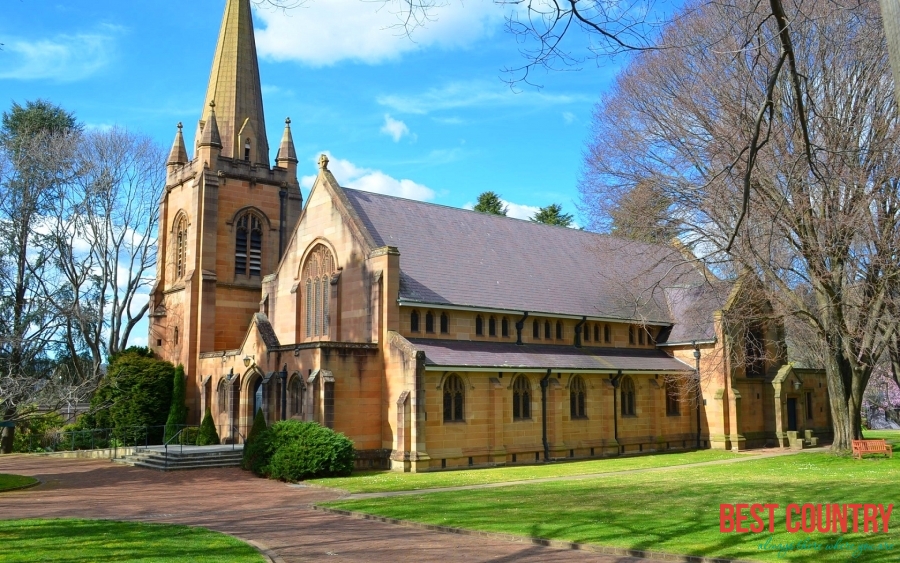 Religion in Australia is diverse. The Constitution of Australia of 1901 prohibits the Commonwealth government from establishing a church or interfering with the freedom of religion; however, the country is predominantly Christian.

In an optional question on the 2011 Census, 61.1% of the Australian population declaring some variety of Christianity. Historically the percentage has been far higher and the religious landscape of Australia is changing and diversifying.Also in 2011, 22.3% of Australians stated "no religion", and a further 9.4% chose not to answer the question. The remaining population is a diverse group which includes Buddhists (2.5%), Muslims (2.2%), Hindus(1.3%), and Jews (0.5%).

Australia's Aboriginal people developed the animist spirituality of the Dreaming and some of the earliest evidence on earth for religious practices among humans has been found in the archaeological record of their ancestors.

Torres Strait Islander religion bore similarities to broader Melanesian spirituality. The general isolation of indigenous Australian religion ended with the arrival of the first British settlers in 1788, whereafter subsequent immigrants and their descendants have been predominantly Christian.

While the Church of England originally held a position of privilege in early colonial Australia, a legal framework guaranteeing religious equality began to evolve within a few short decades.

From the earliest days of the colony there were Jews and other religious minorities. Events such as the 19th century Australian gold rushes brought adherents of the various Chinese religions; and the requirements of the pre-mechanised era of transport brought specialised workers from British India, such as the mainly Muslim "Afghan Cameleers".

While Australia has a strong tradition of secular government, religious organisations have played a significant role in public life. The Christian churches, in particular, have played an integral role in the development of education, health and welfare services.

The Roman Catholic Church is by far the largest non-government provider of health and education services in Australia, and faith-based aid organisations such as the St Vincent De Paul Society and Salvation Army receive widespread community support.New religious movements are also practised.