Say goodbye to your winter hats and your well-stuffed goose; Christmas in Australia is a much different affair to those back in the Northern Hemisphere. There’s no snow, no cold weather and definitely no hot cocoa (unless you’re the type of person that enjoys hot beverages on extremely hot days).

Christmas in Australia comes during the summer, so you can think again before putting together an ugly Christmas sweater party here. The days can get well up to near 40 degrees Celsius if the sun decides to show itself in full force. In fact, many Aussies will head to the beach on Christmas or Boxing Day to be with their friends. 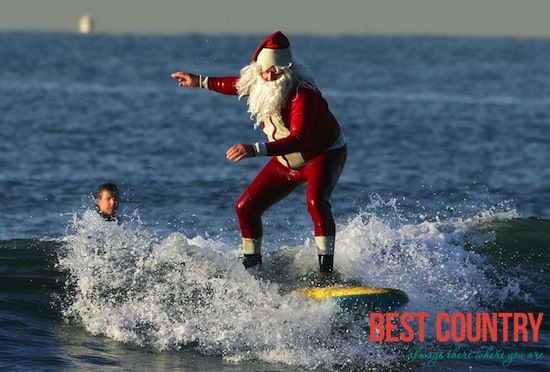 Because of the heat, it is not uncommon to enjoy a special Christmas dinner or lunch of purely cold dishes: think cold prawns, salads and lots of cold brew. If you’re hoping for the typical Christmas goose with mashed potatoes, gravy, stuffing and all the trimmings, you better request it well in advance! Your other option would be to enjoy a nice Australian barbie.

Christmas is the big holiday for most of Australia, but being the multi-cultural country that it is, there are definitely heaps of people that celebrate a variety of other religions and holidays.

Snow may not be a part of the Aussie holiday tradition yet many shops and homes will put up traditional Christmas garb, such as a tree, mistletoe and snowflakes. I don’t know about you, but it just doesn’t seem right. I’ve only experienced one Christmas down under so far, and let me tell you that turning the air conditioning on during our prawn and seafood-infused lunch did not feel like Christmas at all.

Still, enjoying a Christmas down under opens up opportunities that you just can’t get in the cold north, like hanging out at the beach (40,000 at Bondi in Sydney), enjoying a cold beer in the sunshine and taking your dinner outdoors.

To get everyone in the Christmas spirit, many Australian cities will have activities on during the month of December, such as caroling and special markets. Sydney is known for its Carols in the Domain Christmas concert that happens around mid-December each year in the Royal Botanic Gardens. Carols by Candlelight takes place on Christmas Eve in Melbourne’s Federation Square. Brisbane also holds many of its own Christmas traditions each year, including Lord Mayor’s Christmas Carols concert and Christmas lights contests.

The Australian Christmas season is an interesting time of year to be in the country; the weather is gorgeous and everyone is out to have a good time. One thing, though, that you might want to keep in mind: it is the holiday season, so very little working will be taking place.