New Year is celebrated with great enthusiasm and gaiety by whole of Australia. January 1 is the New Year's day in Australia as per the Gregorian Calendar. New Year Celebrations end on January 6.

All discotheques, pubs, clubs, hotels, party halls and even beaches are crowded with party maniacs. Australians celebrate the day with high spirits and excitement. Even if they are at homes, levels of energy are very high. As soon as church bells ring at 12 midnight, everyone start producing loud noises with trumpets, drums, horns etc and wish each other Happy New Year.

New Year is a public holiday and many people love to spend this day with their family and friends. It's most often an outdoor activity which includes picnics, camping, surfing, water sports etc. Australia becomes the largest tourist hub at the time of New Year. More than 3,00,000 tourists celebrate their New Year in Australia. The main attraction of Australian New Year are it's magnificent fireworks.

Two major cities of Australia are famous for their grand New Year Celebrations. These are: 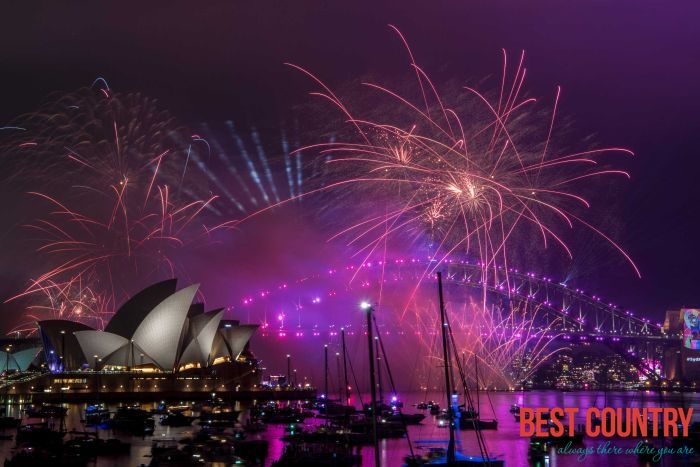 New Year's celebration is the second largest in the world. More than 80,000 fireworks lit the famous Sydney Harbour Bridge. The splendid view enthralls the crowd leaving a memorable impression in their minds. The fireworks lit on the New Year's Eve can be seen from a 16 km radius around Sydney. A brilliant work of vocalists and the soundtrack made by the Sydney Council creates a perfect New Year aura. Then comes the Sydney New Year beach Party in a row. People enjoy camping and bonfires. One must not forget to go for a cruise ride aboard some of the popular New Year Cruises.

People of Sydney have a gala time at New Year's Eve. They love to attend New Year Parties which is the biggest rejuvenating time for all the working and non-working people.

Attracting tourists all over the world, New Year has become a major festival of Australia. Verve of New Year celebrations can also be witnessed in the beautiful city of Australia, Melbourne.

Melbourne is famous for its New Year Eve parties. Discotheques and all party places are thronged with people from various places. A seven course gourmet dinner also adds zing to the party mood. At the time of New Year, Melbourne rocks with the rock bands performing on its beautiful beaches.

If one is in Melbourne for New Year, then Chinese-Australian rituals cannot be avoided by anyone. Chinese rituals like sacrificing to the ancestors are practiced with great enthusiasm and devotion. The best way to get the feel of the true China, then one must visit the China place located in Melbourne.