Holidays and Festivals in Ecuador 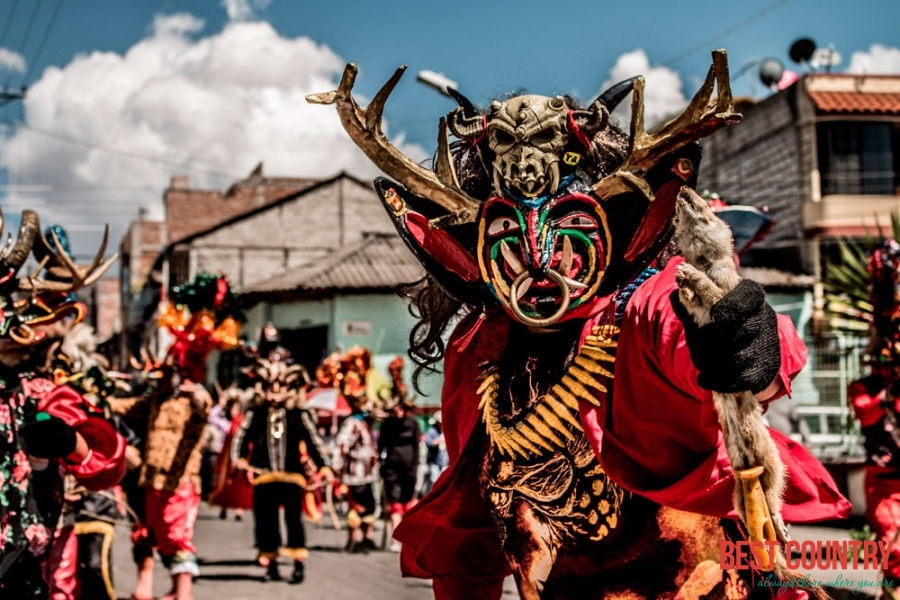 Every city of Ecuador celebrates their own festivals either in honor of a saint (Most Ecuadorians are Catholics), or the city's festivities. There are plenty more celebrations throughout the country such as: "Virgen del Carmen", on the 16th of July. The "Fiesta de la Mama Negra" in Latacunga, which is held on the 23rd and 24th of September, among others.

The main festivities of the country are as follows:

Carnival is celebrated in February or March (the week before Lent) and ends on Ash Wednesday. Ecuador has a very unique version of Carnival, nothing compared to other countries celebrations. Some Ecuadorians don't agree, but most children and teenagers love it!. They celebrate it throwing balloons filled with water, bags filled with flour, water weapons and anything (even eggs) that may make others look messy. But it's fun...!Even before Carnival lots of people sell these Water weapons in every part of the country.

Most travelers prefer to go to Ambato, where Carnival is celebrated with colorful parades (Fiesta de las Flores y de las Frutas), instead of the wild water throwing in other parts of the country. The authorities are trying to eradicate this traditional custom and actually it has been done in "Salinas" the best beach of Ecuador. The Major of the city has followed Ambato's example and now in Salinas water throwing has been banned.

"Semana Santa", is celebrated the week before Easter and starts on Domingo de Ramos (Palm Sunday). The celebration is held all over the country. There are some processions in the streets on Good Friday, specially in Quito. A very important tradition during the Holy week that is worth to mention is the "Fanesca". Which is a traditional soup made with Bacalao (salt fish) and several different grains. During these days the Catholics don't eat meat.

Corpus Cristi is held on Thursday after Trinity Sunday. The celebration is much more popular in the highlands, in the provinces of Chimborazo, Tungurahua, Cotopaxi and in Loja. The Corpus Cristi is celebrated in different ways according to the tradition of each town. For example the average Corpus Cristi in most of the highland towns involves: costumes, music and dancing. While in Cotopaxi masked dancers dance throughout the streets and have some 12 m high greased poles (palos encebados), which have to be climbed (by a brave man) to obtain the prizes hanging on the top of it.

This festivity is held on the 24th of June in the Otavalo valley and it takes a whole week. A very unique celebration. A ritual to honor "Pachamama" (Mother Earth) that involves local men, who dress up with varied costumes and start dancing from one house to another, until they reach the chapel of San Juan. Once there, they start throwing rocks at each other.

San Pedro and San Pablo festivities are held on the 29th of June, which starts the night before with bonfires in the streets, with women that want to become pregnant jumping over it. This festival is held in Imbabura province specially in Cayambe and Cotacachi. Also, in Chimborazo (Achupallas and Alausi).

Day of the Dead

The most important dates in the indigenous' calendar are the 1st and 2nd of November. All Saints' Day (Todos los Santos) and Day of the Dead (Dia de los Difuntos, o muertos).The ancient belief is that the soul visits its relatives within these days and should have plenty of food to be fed and continue further on its journey to the after life.

The family gets ready for this visit and among the several specialties that they prepare are the "bread dolls", which have an specific meaning depending on the shape. Horse shaped breads for example means transport.

The ritual involves the construction of a tomb that is adorned with the soul's favorite drink and food and over this tomb they place black cloth and the bread dolls together with several other things that are meaningful to the ritual.

Once the Soul arrives and celebrates with its living relatives, all of them celebrate as well with a big glass of Colada Morada (a purple sweet drink). Then, the ceremony is taken to the local cemetery. The ritual is done for up to three years. It is not continued afterwards. The celebration itself is a mixture of ethnic cultures and Catholic customs.

At the present times, as everywhere else, most Ecuadorians celebrate "Día de los Difuntos, o muertos" in a different practical way; just visiting their deceased relatives in the cemetery and adorning their tombs with flowers.

Christmas (Navidad), is celebrated in Ecuador as everywhere else in the world. But, the best and most original Christmas celebration in Ecuador is the "Pase del Niño" held in Cuenca on the 24th of December.

Ecuador has a very unique tradition on December 31, Ecuadorians celebrate New Year's eve with the "años viejos"("old years"). These, are stuffed dummies constructed with paper, sawdust, wood and firecrackers shown through the whole country before they are burned.

The stuffed dummies on the picture on your left for example characterize Osama Bin Laden. But other local, international politicians and famous personalities are also characterized representing the old year. Children and women (or men dressed as women) in black play the old year's "widow" role, crying and asking for some money or candies in the streets, or from house to house for the old year's (dummy) funeral.

When the year that has gone by has been a very bad year, most people and the dummy's widow kick or wipe it out before it is burned, to have a better year. This tradition takes place everywhere in Ecuador, but the most exciting place to spend New year's eve is in Salinas.

A Gringo, or foreigner is always considered a guest of honor and is welcome everywhere. You should always be polite and respectful though some traditional celebrations, dancing, or acts may seem crazy, or old fashioned. Ecuadorians are very sensitive, try not to offend and follow their customs.

For example never refuse an invitation to dance, drink or food. Also, remember that most Ecuadorians love to drink. In most parties, or meetings you'll always find heavy drinking. Try to be polite, enjoy the best of it and then depart quietly to avoid any difficulties.