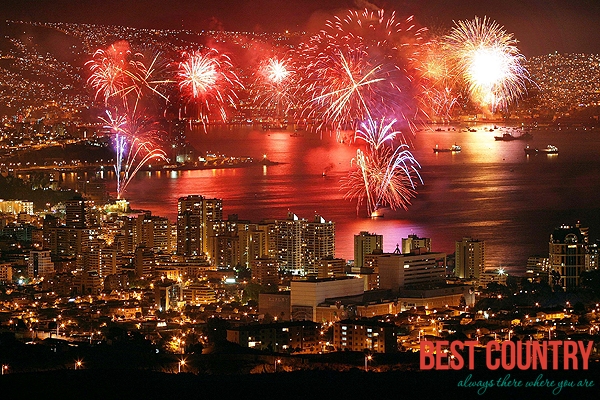 Chile has highly splendid and magnificent New Year celebrations. The New Years Eve in Chile is simply pleasurable, much supported by the pleasant climatic conditions. When most part of the world is under extreme cold conditions during New year's time, Chile has a comparatively pleasantly warm weather, which offers a respite to all those who have been otherwise skipping their New Year celebrations on the grounds of unsupportive cold weather.

Many people from around the world gather in different parts of Chile to be a part of some unforgettable moments created out of the modern day as well as traditional celebrations made in Chile on New Years Eve. With Christianity being the major religion of Chile, one can clearly sense its profound impact on the lives of natives, as well as the New Years Eve celebrations

Usually, people prefer to major tourist spots of Chile during the New Year's time, which host some of the best New Years Eve celebrations. Among those cities, the Santiago de Chile, Andacollo, and the entire capital city of Valparaiso are the most prominent ones.

Valparaiso has some beautiful seacoasts, which can offer some great comforting time till the time, New Years Eve arrives. The other popular destination is Easter Island. With the arrival of New Years Eve in Chile, almost everyone let looses himself in the whacking of exhilarating and jovial celebrations.

The capital city of Valparaiso hosts the best and biggest parties, and draws the maximum crowd of tourists in Chile than any other place. At the stroke of the midnight, a spectacular show of fireworks is the moment of celebration extremities, when everyone present around cheers out loud, make noises, and blow trumpets to mark their grand welcome to the New Year.

Hugs and kisses are shared, tears are dropped for those who are not close, and then everyone shouts ‘Happy New Year' in chord. Everyone pray and hope for a peaceful and prosperous year ahead for them and for everyone.

Fireworks show in Valparaiso is considered as the most majestic and the biggest fireworks show of Chile. Other than that, Torre Entel is another great place to be in to witness some splendid fireworks show. Throng of people comes in to these places, and therefore, it is not easy for everyone to get the best view, or get in it in the first place.

But before that, number of majestic parties and equally grand feasts hosted by the big and small pubs, restaurants, and clubs of the city, but also popular and not-so popular streets. It is successfully supported by the various rock bands performing live on the night, with thousands and more of the live and lively audience in attendance. Celebrations began on New Years Eve goes on whole night till the early hours of the first morning of the New Year. Some people do actually end up sleeping on the streets after a hectic New Years Eve celebration.

However, not everyone believes to bank their celebrations plan on social parties. Many people organize house feasts on New Years Eve, in which old and close friends, members of extended family, neighbors, and all those who are entitled to be called for, are invited. Before the stroke of midnight, they are served with the special feast which includes finest of champagne and wine, various salads, a well toasted barbeque, and a strawberry ice-cream as dessert.

Usually, just a few minutes before the New Year arrives, people tune in to radio to prominently have the voice of Julian Garcia Reyes. There is another tradition of running around with a suitcase in hand, with a belief that doing so confers one with lots of travelling in the coming year.

Then, people ensure to have lentils and grapes, which have their respective benefits according to beliefs. There is an old tradition in Chile of setting off firecrackers on New Years Eve, after clock turns twelve. However, children out of their inability to resist for burning them, can be find engaged in it from the late evening.