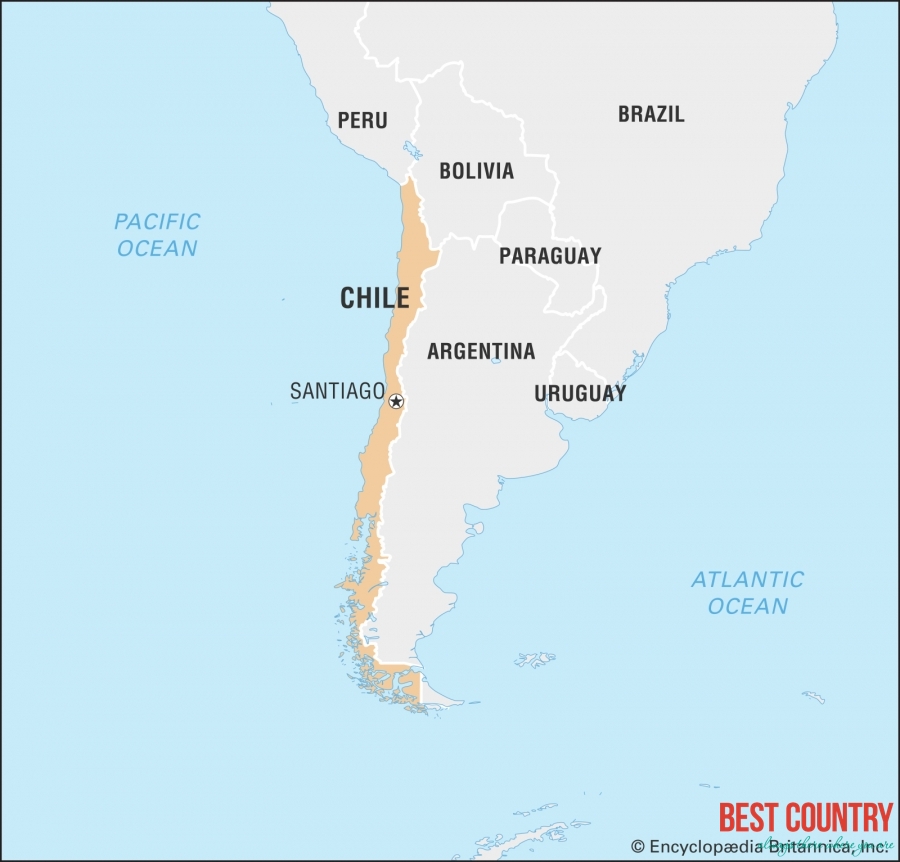 A long and narrow coastal Southern Cone country on the west side of the Andes Mountains, Chile stretches over 4,630 kilometres (2,880 mi) north to south, but only 430 kilometres (265 mi) at its widest point east to west.

This encompasses a remarkable variety of landscapes. It contains 756,950 square kilometres (292,260 sq mi) of land area. It is situated within the Pacific Ring of Fire. Including its offshore islands, but excluding its Antarctic claim, Chile lies between latitudes 17° and 56°S, and longitudes 66° and 81°W.

The northern Atacama Desert contains great mineral wealth, primarily copper and nitrates. The relatively small Central Valley, which includes Santiago, dominates the country in terms of population and agricultural resources. This area also is the historical center from which Chile expanded in the late 19th century, when it integrated the northern and southern regions. Southern Chile is rich in forests, grazing lands, and features a string of volcanoes and lakes. The southern coast is a labyrinth of fjords, inlets, canals, twisting peninsulas, and islands. The Andes Mountains are located on the eastern border. Chile is the longest north-south country in the world, and also claims 1,250,000 km2 (480,000 sq mi) of Antarctica as part of its territory. However, this latter claim is suspended under the terms of the Antarctic Treaty, of which Chile is a signatory.

Chile controls Easter Island and Sala y Gómez Island, the easternmost islands of Polynesia, which it incorporated to its territory in 1888, and Robinson Crusoe Island, more than 600 kilometres (370 mi) from the mainland, in the Juan Fernández Islands. Easter Island is today a province of Chile. Also controlled but only temporarily inhabited (by some local fishermen) are the small islands of Sala y Gómez, San Ambrosio and San Felix. These islands are notable because they extend Chile\'s claim to territorial waters out from its coast into the Pacific.