Santiago de Chile is the capital of Chile 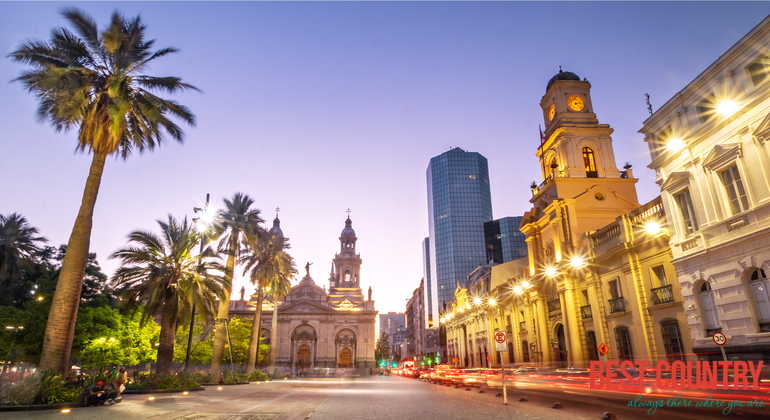 Santiago, also known as Santiago de Chile, is the capital and largest city of Chile. It is also the center of its largest conurbation. Santiago is located in the country's central valley, at an elevation of 520 m (1,706 ft) above mean sea level.

Founded in 1541, Santiago has been the capital city of Chile since colonial times. The city has a downtown core of 19th century neoclassical architecture and winding side-streets, dotted by art deco, neo-gothic, and other styles. Santiago's cityscape is shaped by several stand-alone hills and the fast-flowing Mapocho River, lined by parks such as Parque Forestal. Mountains of the Andes chain can be seen from most points in the city. These mountains contribute to a considerable smog problem, particularly during winter. The city outskirts are surrounded by vineyards, and Santiago is within a few hours of both the mountains and the Pacific Ocean.

Santiago's steady economic growth over the past few decades has transformed it into a modern metropolis. The city is now home to growing theater and restaurant scenes, extensive suburban development, dozens of shopping centers, and a rising skyline, including the tallest building in Latin America, the Gran Torre Santiago. It includes several major universities, and has developed a modern transportation infrastructure, including a free flow toll-based, partly underground urban freeway system and the Metro de Santiago, South America's most extensive subway system. Santiago is the cultural, political and financial center of Chile and is home to the regional headquarters of many multinational corporations. The Chilean executive and judicial powers are located in Santiago, but Congress meets in nearby Valparaíso.

Santiago is named after the biblical figure St. James.

Parque Metropolitano - This vast park is home to Cerro San Cristóbal. From the top there is a beautiful view over the city and, on a clear day, the Andes. The summit can be reached by funicular, cable car, or a long hike. In the park there is also a botanical garden, zoo and two swimming pools. Pope John Paul II visited its summit in 1987.

Plaza De Armas - The capital's main plaza, also the site of the national cathedral and main post office. It's few blocks from the traditional Central Market and has it's own Metro Station.

Santiago Centro - The Centro (Downtown) area is a nice place for a stroll down some of its major Paseos (streets turned pedestrian walkways).

La Chascona - One of three homes of the famous poet Pablo Neruda, La Chascona (meaning tangle-haired woman, after his third wife) is in the artistic Bellavista neighborhood. The house is filled with lots of quirky artifacts collected by Neruda throughout his life, as well as artwork by some of his famous friends.

Parque Forestal - A long park that runs parallel to the Mapocho River, also site of the National Museum of Fine Arts and Modern Art Museum.

Theatre & Dance - Santiago offers much in the performing arts.

Centro Cultural Matucana 100 - Inaugurated in 2002, Matucana 100 is an excellent exhibition venue for a variety of arts.

Teatro Municipal - Historical performance venue, including international dance and opera, worth a visit even if just from its outside.

Jazz Clubs - Santiago is home to an impressive jazz scene, with several intimate clubs scattered throughout the city.

Cerro Santa Lucia. A park with fountains and stairs leading up to a fort and viewpoint the top. The summit has a great view of all but the skyscraper-obscured city center. Charles Darwin visited this peak at one point in his travels; his words are immortalized in a plaque at the summit.

Museo Chileno de Arte Precolombino (Chilean Museum of Pre-Columbian Art). The well put together Chilean Museum of Pre-Columbian Art houses various artefacts from Mesoamerica and South America, featuring cultures such as the Olmec, Maya and Inca civilizations. Descriptions on the artefacts and the ancients' way of life are well-written and in both English and Spanish. Highlights include a Mayan stone stele and Andean mummies, which precede their Egyptian counterparts.

Palacio Cousino Old palace owned by a wealthy spanish-portuguese family. The architecture is a mix of spanish and french style.