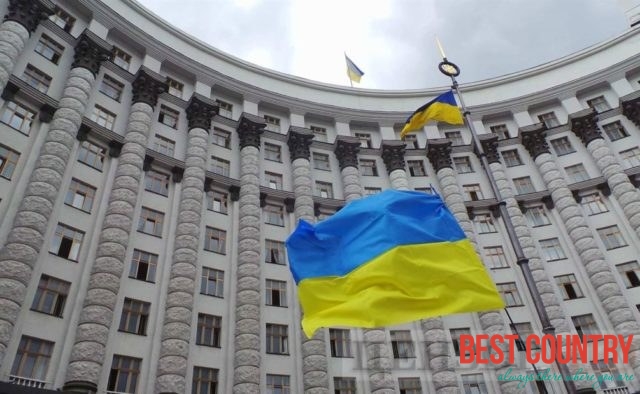 The politics of Ukraine take place in a framework of a semi-presidential representative democratic republic and of a multi-party system. A Cabinet of Ministers exercises executive power (jointly with the president until 1996). Legislative power is vested in Ukraine's parliament, the Verkhovna Rada.

As part of the Soviet Union as the Ukrainian Soviet Socialist Republic until 1991, the political system featured a single-party socialist-republic framework characterized by the superior role of the Communist Party of Ukraine (CPU), the sole-governing party then permitted by the Ukrainian SSR's constitution. In 1996, the current constitution replaced the previous constitution that was introduced in 1978.

From 2014 changes in the administration on-the-ground in Crimea, Donetsk and Luhansk have complicated the de facto political situation associated with those areas.

President of Ukraine: Volodymyr Zelensky (since 20 May 2019)

The president is elected by popular vote for a five-year term. The President nominates the Prime Minister, who must be confirmed by parliament. The Prime-minister and cabinet are de jure appointed by the Parliament on submission of the President and Prime Minister respectively. Pursuant to Article 114 of the Constitution of Ukraine.

The Verkhovna Rada (Parliament of Ukraine) has 450 members, elected for a four-year term (five-year between 2006 and 2012 with the 2004 amendments). Prior to 2006, half of the members were elected by proportional representation and the other half by single-seat constituencies. In the 2006 and 2007 Ukrainian parliamentary elections, all 450 members of the Verkhovna Rada were elected by party-list proportional representation, but the system returned to parallel voting in 2012.

Ukrainian parties tend not to have clear-cut ideologies but incline to centre around civilizational and geostrategic orientations (rather than economic and socio-political agendas, as in Western politics), around personalities and business interests. Party membership is lower than 1% of the population eligible to vote (compared to an average of 4.7% in the European Union).