New Year - is the only Slavic feast which is celebrated at the state level in Ukraine. Celebrating New Year in Ukraine combines the most joyful feelings associated with peace, love and understanding. 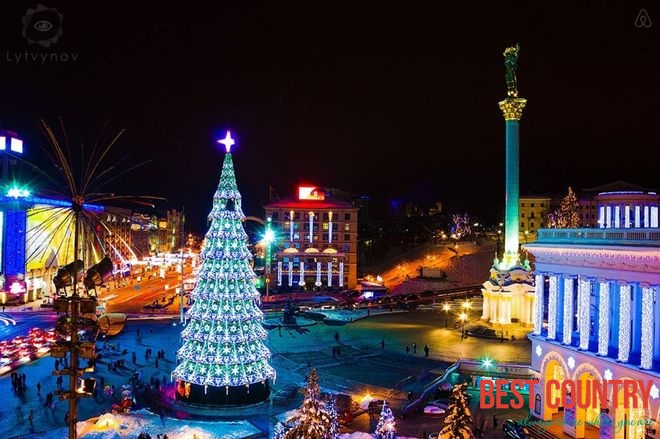 This holiday in Ukraine is associated with new beginnings, many gifts, the implementation of the deepest wishes in the coming year. New Year, like many other holidays in Ukraine, has its roots in antiquity.

There are many traditions of celebrating of the New Year in Ukraine; they changed, as the century changed. Most of them are borrowed from western culture.

This is due to the advent of Christianity in the Slavic land and innovation of Emperor Peter I, who moved the official date of New Year celebrations from January 13 to January 1.

From the time of the Slavic paganism in the tradition of celebrating of this day there firmly entered mummers (people dressed in various costumes and masks), and the era of Peter the Great brought a Christmas tree with toys and fireworks.

USSR, in turn, inoculated their people as a symbol of the New Year - Ded Moroz - Ukrainian Santa Claus or Saint Nicholas and his granddaughter, Snegurochka (Snow Maiden).

Santa rooted in the tradition of New Year celebrations in Ukraine and is now everyone's favorite kind grandfather, from whom millions of children across the country expect New Year presents.

One prepares by the New Year in advance. There is prepared a festive table, decorated the Christmas tree toys. New Year is a family celebration, because all the relatives gather around the table to see off the old year, wishing all bad to be left, and the New Year to bring only good things and waiting for midnight.

At midnight comes the new year and all congratulate each other after its arrival, and on city streets one could hear laughter and see the fireworks.

Ukraine has its own unique feature of New Year celebrations. It consists in the fact that residents, mostly in central and eastern parts of the country still celebrate its coming twice - on Moscow time, and Kiev, i.e. at 23.00 and midnight.

This is due to the fact that the country has long been part of the USSR and many people simply got used to celebrate the New Year with the striking of Moscow chimes.

There is another interesting feature of New Year celebrations in Ukraine, it is connected with the fact that Peter I shifted its date.

So far, 13 January is still celebrated by people of Ukraine,but it is called old New Year. Old New Year - a rare historical phenomenon and an additional holiday for the Ukrainian people.

It is celebrated though with smaller celebrations, but with the ancient Slavic traditions. It is significant that on this day, according to ancient traditions, boys and girls should go into the house and schedrovat - to change into different costumes and masks, sing holiday songs.

For that the owners should give them gifts. That evening after dinner it is necessarily to go to the neighbors and to apologize for the possible guilt to each other, to meet the New Year in peace and harmony.