Kyiv is the capital of Ukraine 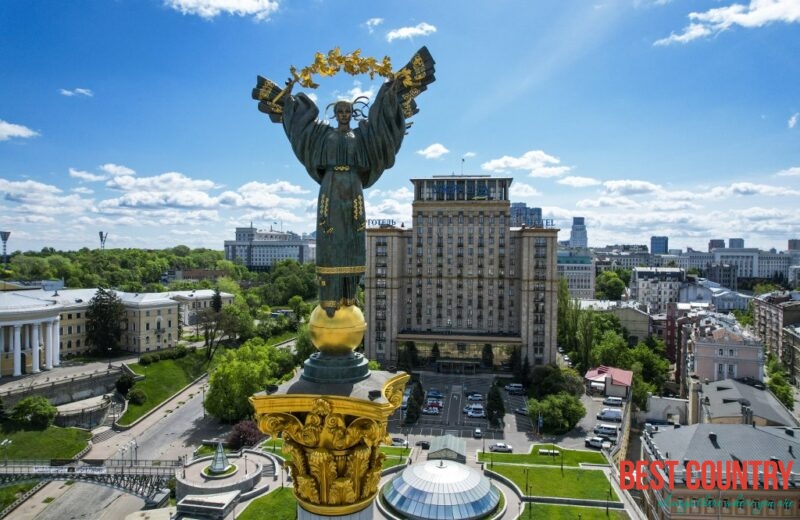 The area of the capital is nearly 800 sq. km. It’s population has started growing recently and at the beginning of 2004 was 2611 thousand people, most of them Ukrainians but also many Russians, Jews, Bilorussians and Poles. The city is spread on both banks in the middle of the river Dnipro. Central districts of the capital are situated on the Kviv plain that before Dnipro is forming it’s high Right Bank.

There are many deep ravines in the city that divide it, into separate Highlands that are called mountains — Starokyivska, Pecherska, Shcherkavytsya, Khorevytsya and others. The new part of the city, is situated on the lowland left bank of Dnipro. There were no buildings here before 1917 and the territory belonged to the Chernigiv region.

The historic part of the city consists of the places that formed hundreds of years ago: Podil, Pechersk, Lypky, Zwynets, Obolon, Klov, Gonchary and others.

The climate in Kyiv is moderately continental, with gentle winters and warm summers. Average January temperatures are -5,8°C, average July temperatures +19,5°C. The weather conditions in Kyiv are influenced greatly by the Dnipro and it’s Kyiv and Kaniv water reservoirs. The width of the Dnipro inside the city reaches 400–600 m, depth — up to 12 m. The city lies on the border of two natural zones — the mixed forests (Ukrainian Polissiya) and the mixed forests and plains. Kyiv is surrounded by forests and has 13 parks, including the Central Park of culture and recreation that unites all the parks along the right bank of Dnipro, Hydropark and others.

Kyiv is a large industrial centre of Ukraine, the leading industries being mechanical engineering and metallurgy. The other highly developed areas include chemical and transport, mechanical engineering, radio-electronics, and production of planes, trawlers, and artificial stones. The strong energy base aids the development of industry. Along with heavy industry such areas as food and publishing are developing. Kyiv is a large centre of car, rail, air and river ways. Due to the concentration of large economic potential and city population Kyiv became a large industrial centre uniting a huge agglomeration of towns around it (Bila Tserkva, Vasylkiv, Fastiv, Boryspil, Irpin and others).

The Ukrainian capital is one of the largest European scientific and cultural centers. There is a wide web of scientific establishments, higher education establishments, medium specialized schools, lyceums, gymnasiums, places of culture and art.

Lives of many outstanding people are connected to Kyiv — political, state and social figures, writers, composers, painters, scientists, the memory of which is eternalized in monuments, memorials street and square names.