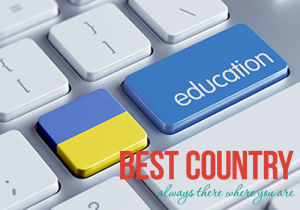 Even though Ukraine is not an economic power, it has 100% literacy rate. The country’s constitution has a lot of impact on the educational system.

Ukraine educational system is largely based on the system since Russia was under the influence of Russian some years back.

Today Ukraine is considered by many companies for the cheap labor and advantage of trading within Europe.

The school education is easily divided in to three phases or levels.

They are the younger school, middle school, and senior schools.

Younger schools comprise of grades 1 to 4. The grades 4 – 9 are referred as middle school.

Both the younger and middle school is in the same campus although there is need to an exam to continue the middle school.

The grades 10 and 11 are very crucial in deciding the university education. The used to be an entrance exam apart from the Independent government tests (IGT).

There are numerous HEIs in Ukraine run by the state and few private institutions. Sometimes back the students who are willing to pay the fees don’t necessarily have to pass the entrance examinations. But now after the IGT exams determine the quality of student with regard to studies.

The academic year runs from September to June. After being independent the country also offered lots of English language courses in school and university level. New courses are also offered completely in English.

The Undergraduate studies take minimum of 4 years to complete which was earlier 5 years when soviet was present in the country. Most of the programs are in the Ukrainian language. The bachelor’s degrees are conferred only after the bologna process.

The graduate studies take a minimum of 2 years after the bachelor’s degree and 5-6 years of taken the masters degree directly.

Scholarships are offered for students with very good academics and continuous improvement.

Every time the student reaches the top grade ‘5’ the value of the scholarship increases by 25%. The main disciplines of study are arts, design, cognitive sciences, engineering and many more.

Ukraine has a two-degree system at doctoral level; Kandydat nauk Candidate of Sciences as popularly called and Doctor nauk.

The first qualification is obtained after three or four years of study by submitting and publicly defending a thesis and passing the required examinations.

The candidate's thesis can be prepared while following various forms of post-graduate studies. The highest degree of science as called in western countries as habilitation is also offered which intensive and extensive research is achieved and the theses have been proved successfully completed and defended.This might take quite a long period to complete.

Studying in Ukraine can be a very good option since it has the potential to be a good economy in the future and also it produces Europe’s third largest pool of graduates.

The increasing awareness about the English courses is a welcome sign to the international students and certain things have to be kept in mind to live a cheap life in Ukraine. Better have a good rapport with the local students to enjoy the fringe benefits.

The summer is very warm and numerous activities are offered along with studies. These summer courses are more often in English to enable intercultural education and have a global atmosphere.

The summer programs on offer can be book well before the start of the course giving you enough time to prepare for the course and summer.

Earlier you learn Ukrainian language the better for your social life. Apart from Ukrainian there are lots of language schools offering various European languages and most of the younger generation speaks English which might help you learn English in mutual consent.