Most Christians in the Ukraine belong to the Orthodox Church. The Orthodox recognizes the Julian calendar, so that Christmas is celebrated on January 7. 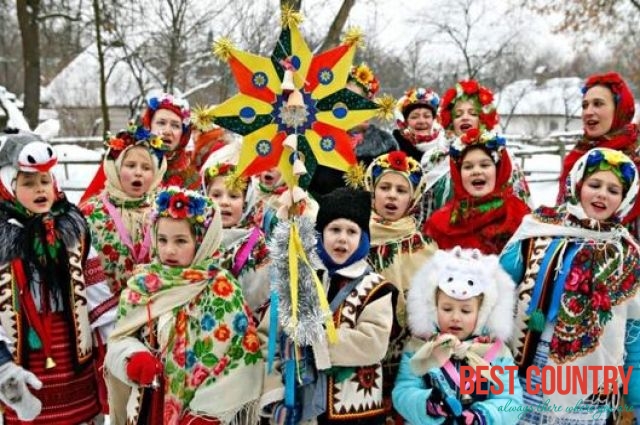 Christianity was introduced into Ukraine in 988 AD. The culture at the time was agrarian (agritculture) and the pagan religions and the traditions associated with it were deeply entrenched.

Therefore, the Church adopted a policy of tolerance toward the ancient customs and accepted many pagan traditions as part of the Christian holidays.

Christmas celebrations in the Ukraine begin on December 19, when St. Nicholas comes into town.

St. Nicholas Day is a day of great merriment. People invite guests into their homes. St. Nicholas visits each town and home accompanied by angels who assist him. They quiz the children on their catechism and give them presents and sweets.

Ukrainians have a very unique Christmas ornament for their Christmas tree. According to legend, a family was so poor that they could not afford to decorate their tree.

The household spiders heard the mother's prayers, and after the family went to bed, the spiders wove intricate webs on the tree as decorations.

In the morning the sun's rays turned the spider webs into silver and gold. Christmas trees are decorated with lights and candies and spider webs to remember this miracle.

In Christmas Eve, in most parts of the Ukraine, people create a scene from the Bible of Jesus birth. The show Baby Jesus in a manger, in what is called a cave. Mary and strangers are offering their gifts to the Baby Jesus.

The Star of Bethlehem Star is in the sky. These "cave" scenes are exhibited at public places, usually near or inside churches. All night candles are installed inside the "caves" for people who come to church for the night service so they can observe them.

The Holy Night is on Christmas Eve, January 6.

On Christmas Eve there is a meal called the Holy Supper. Hay is spread under the table to remind families of Christ's humble birth in a manger. An extra place is set for r deceased loved ones who may join them for Christmas joy.

When the first star, the Star of Bethlehem appears in the sky, the family begins the Holy Supper.

The father of the house circles the table with a sheaf of wheat stalks. The wheat stalks symbolize all of the family's ancestors literally "grandfather spirit".

the wheat stalks also symbolize the importance of the ancient and rich wheat corps of Ukraine, the staff of life through the centuries. The symbolic wheat stalks are set near the holy icons for the remainder of the season.

The father of the family says a prayer and then the traditional Christmas greet "Christ is Born". the family answers "Let us Glorify Him!

The meal served for the Holy Supper is vegetarian, containing no meat. There are twelve dishes served in remembrance of Jesus' twelve apostles.

The most important dish of the Holy Supper is Kutia, which is made with boiled wheat mixed with poppy seeds and honey.

Kutia is served with Uzvar, which is a drink containing twelve types of stewed fruit. Many varieties of fish are also served, along with dumplings, cabbage, potatoes and borsch (beet soup).

After supper, caroling is a popular way to spend the rest of the evening. Carolers walk through the town with a star on a long pole and singing. Ukrainians have two types of Christmas carols.

Christmas is a joyous day, which Ukrainian families start with attendance in church.

New Year's is celebrated on January 13. On the last night of the year New Year's carols are sung. Carolers go from door to door, singing fold carols and performing small plays.

This is ofter the last time of partying before the Lenten season begins. The Christmas Season closes with Epiphany, which is January 19.