There is no real "Slovak cuisine", that would be known and used all around the world, like the Chinese or Italian. However, there are meals that you would encounter more often in Slovakia than elsewhere in the world. 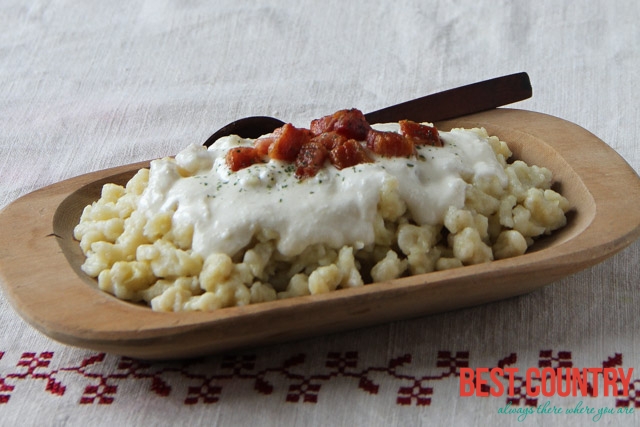 Potatoes, wheat flour, cow and sheep cheese, cabbage, onions and garlic are the bases of the traditional food in Slovakia.

Although rice does not belong to the crops grown in Slovakia, it is imported and widely used in the modern kitchen. You will often encounter beans, corn, lentils and other vegetables.

Pork, beef, chicken and fish are the most popular meats. Less frequently one will be offered lamb, goose, duck, turkey or venison.

Bread is very important in the nutrition. Most people in Slovakia eat it for the breakfast and also quite often with the dinner. The bread differs from region to region, town to town, baker to baker, just like elsewhere in Europe.

Finally a short Slovak food glossary. It will be practical if you want to try out something you probably won't find in other countries.

If you ask one hundred Slovak people to tell you one and only one Slovak traditional meal, usually at least 90 of them will say "bryndzove halusky" ("bryndzové halušky"), small dumplings made of potato dough with sheep cheese and topped with scrambled bacon ("Speck" in German).

("oštiepok", "korbáčik") different sorts of cheese, either smoked or not.

a cold salad made of codfish, mayonnaise and some vegetables. Quite popular snack in the Bratislava region, and lately also in other parts of Slovakia.

Buy it packed in supermarket or visit a buffet and ask for "patnast deko tresky a dva rohliky" (five ounces of treska and two rolls).