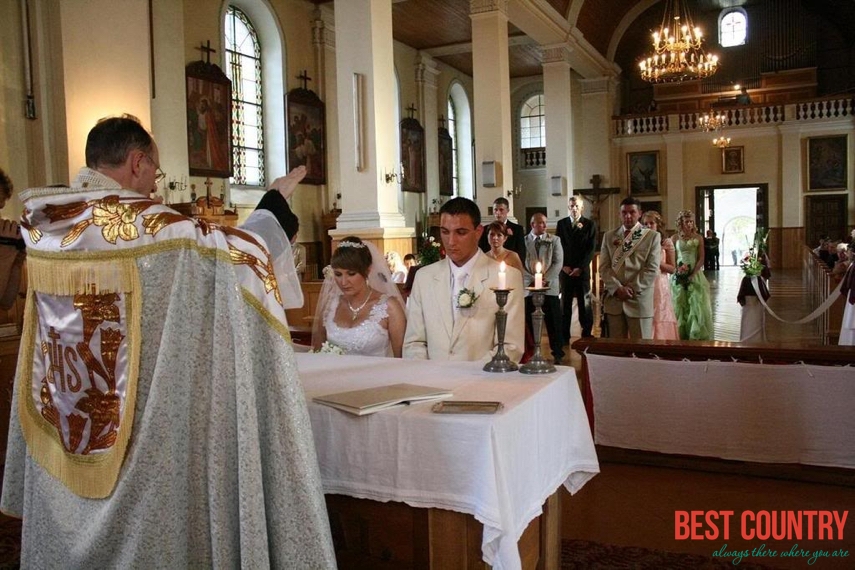 Lithuania is an old country with wedding traditions that stretch back hundreds of years. Over the centuries weddings traditions and customs in Lithuania have evolved very slowly, with one thing remaining constant: the overriding importance of family. Many of the traditions practiced today have deep roots that are easily traced to customs and traditions from long ago.

Traditionally marriage in Lithuania is divided into three parts. First there is the matchmaker who puts the couple together and arranges the dowry, then there is the wedding ceremony itself which consists of several very specific customs, and finally there is what is called in Lithuanian the atgriztai, or the coming back, during which the bride and groom return to the bride’s parent’s home, where the bride is now welcomed as a guest rather than as a member of the family.

In the past many Lithuanian families lived rather isolated lives on scattered farms. It was not always easy for young people to meet or to get to know each other.

Therefore the father of a prospective groom would hire the services of a matchmaker to find a suitable wife for his son. Even if a couple knew each other previously and wished to marry, the matchmaker was still hired to negotiate the dowry that the bride’s family would pay to the groom for marrying their daughter.

Engagement periods varied from region to region and could also be determined by whether the couple were already acquainted or whether they first met through the services of the matchmaker.

The first part of the ceremony was the bride’s good-bye to her family and home and her introduction to the groom’s home.

The traditional Lithuanian marriage ceremony itself was very ritualistic. It began early in the morning with the bride saying good-bye to her parents and to her parent’s home.

This was a very dramatic and sad time, with a great deal of sorrowful music and farewell songs, culminating with the bride riding away from her parent’s home and to the home of her future husband.

The bride’s arrival at the home of her intended was the second stage of the marriage ceremony. Preceding the bride would be the kraitveziai, or the dowry drivers.

They would arrive with the bride’s dowry chests which were filled with things that she had collected over the years in anticipation of this very moment. A typical dowry chest might contain such items as rolls of fabric, towels, clothing, bedclothes and similar items.

Towels and sashes were important items in ancient Lithuania. One of the first things the prospective bride did upon entering the groom’s home was to place a red towel on the hearth next to the stove in order to gain the good graces of the spirits of the home. She also hung sashes on various places of honor around the home, and then presented the groom’s parents with towels, sashes, and shirt material.

The second part of the marriage was the wedding ceremony itself.

The actual wedding ceremony itself followed the presentation of the bride to the groom’s household. The bride-to-be entered the church wearing a wreath of rue, symbolizing her childhood.

The ceremony would begin with the bride’s matron of honor and other married women removing the bride’s girlish wreath of rue and replacing it with the headdress of a mature woman, symbolizing the young bride’s transition from girlhood into womanhood.

The wedding vows varied from region to region of Lithuania but were generally fairly simple, requiring the couple to pledge themselves one to another until death parted them. A charming tradition was to have the flower girl and the ring bearer both dressed in exact miniature copies of the bride and groom’s wedding outfits.

At the conclusion of the ceremony the bride and groom place the wedding rings on each other’s finger, symbolizing never-ending love, and the marriage is sealed with a kiss.

Following the vows, friends and family guard the new couple jealously at the reception and spells are cast and rituals performed that are intended to keep evil spirits away from the couple – especially the bride – and which would also insure the couple’s fertility.

Another ancient tradition was for the couple to drink wine and to eat salt and bread upon entering the reception hall – symbols of joy, tears, and work, the three elements of a life together.

The couple would also be showered with both grain and water and were then wrapped in furs to insure that their life together would be rich and successful and that their future harvests would be bountiful and their livestock healthy and fat.

The third and final step in marriage – the coming back.

Finally came the third part of the ceremony. This was the atgriztai or the coming back. The coming back generally took place after a one week honeymoon.

During this part of the ceremony the bride returned to her parent’s home for a brief visit – and she was welcomed into her family’s home as a guest, rather than as a member of the family, symbolizing her transition from her family’s home to her own home.

Today few Lithuanians follow all of the ancient traditions, although in small, rural villages many of the traditions are still followed today as they have been for hundreds of years.

Nevertheless, even Lithuanians living in modern cities still hearken back to many of the ancient traditions as a way to both keeping a tie to their heritage as well as a way to keep the romance of marriage alive and well into the 21st century.