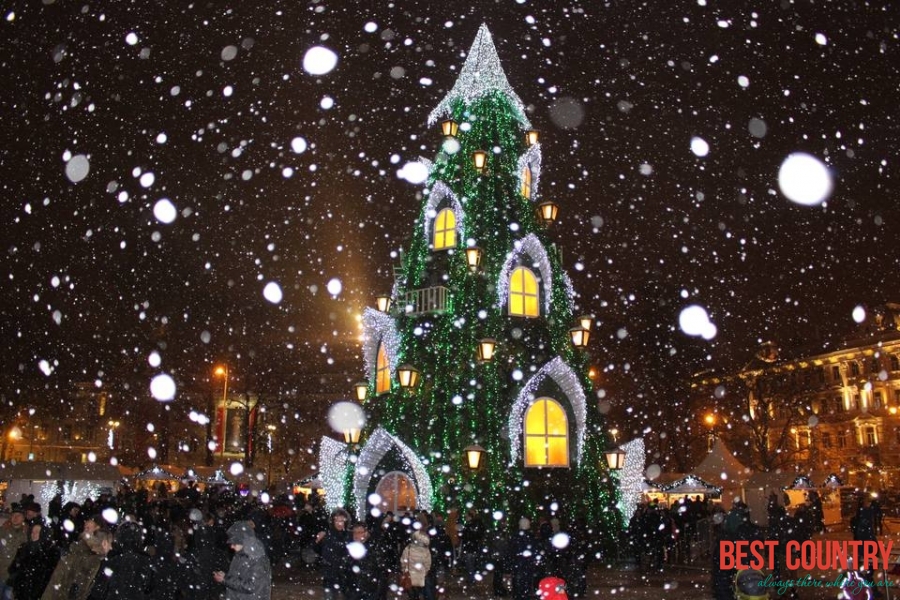 Lithuanian folk tradition treats the Christmas season as a time of religious mystery and folk magic. In past times Lithuanians associated many old superstitions and folk charms with the season. Though no longer taken seriously these magical formulas may still be practiced as a form of entertainment.

In this predominantly Roman Catholic country people once observed Advent with fasting.

This tradition has left its mark on the customary Lithuanian Christmas Eve dinner, which is meatless.

Today Lithuanians observe Christmas Eve with a ceremonial evening meal, fortune-telling games, and attendance at Midnight Mass, which is referred to as the Shepherd’s Mass (see also shepherds).

These include the exchange of Christmas gifts, the decorated Christmas tree, and the nighttime visit of Santa Claus who sometimes makes a personal appearance in Lithuanian homes on Christmas Eve to distribute gifts.

Many Lithuanian families like to gather around the tree after leaving the Christmas Eve dinner table and sing Christmas carols.

In some families children are expected to recite a poem, sing a song, or offer some other kind of performance before receiving their gifts.

The Christmas season closes on January 6, with Epiphany, or Three Kings Day. On this day people write the letters KMB over their doorway in chalk as a reminder of the kings who came to visit the baby Jesus (see also Magi).

The letters stand for the names assigned to the kings in folklore: Kaspar, Melchior, and Balthasar.

Lithuanians make every effort to return home for Christmas Eve, even if it means traveling long distances.

People prepare for the evening’s festivities by bathing, putting on their best clothes, and giving their homes a thorough cleaning. They also cook both the Christmas Eve meal and the Christmas Day meal, since according to custom, no work should be done on December 25.

The family strews the dining table with straw over which is placed a white tablecloth. The hay reminds everyone that Mary gave birth to Jesus in a stable (see also Yule straw).

Plates are often set for family members who could not attend. Plates with a candle in the center are also set for those who have recently died.

Some people observe the tradition of waiting until the first evening star appears in the sky to begin the meal (see also Star of Bethlehem).

In Lithuania both Christmas Eve and the Christmas Eve meal share the same name: Kucios. Before eating the meal Lithuanians say a prayer and observe a ceremonial blessing involving the use of wafers.

The father begins by offering his wafer to his wife and wishing her a joyful Christmas.

She breaks off a piece and says “God grant that we are all together again next year.” Then she extends her wafer to her husband and they repeat the words and actions.

Afterwards everyone at the table exchanges wafers and greetings with every other person present.

This ceremony also gives people a chance to play a game of luck. In breaking the wafer, whoever is left with a bigger piece in their hand will have better fortune in the coming year. Naturally, people try to manipulate this exchange so that they will be left with the larger piece of wafer.

Lithuanians observe December 24 as the feast day of Adam and Eve. In some parts of the country people set apples on the table in their honor. Some people observe another short ceremony with the apples.

The lady of the house cuts an apple into pieces. Then she offers the man of the house the first slice and passes them around until everyone receives his or her piece.

These apple slices remind diners of Adam and Eve’s act of disobedience in the Garden of Eden. Mary’s obedience to God’s will, and the resulting birth of the Savior celebrated on Christmas Day, provides an instructive contrast to this story.

In past times many families thought it unlucky if an odd number of people sat down to dinner on Christmas Eve.

If faced with an odd number of family members the head of the house invited a solitary neighbor or even a beggar to join the family’s Christmas Eve supper.

Today many people still observe a folk custom that requires everyone at the table to eat at least a little bit of every dish. An old folk belief claimed that those who neglected to do so would die before the next Christmas Eve.

Lithuanian folklore asserts that on Christmas Eve many miracles may occur. It was once widely believed that animals gain the power of speech on this magical evening. Creeping into the barn to listen to them was perilous, however.

Their favorite topic of conversation was the death of their masters and they seemed to have foreknowledge of when these deaths would come.

At the exact stroke of midnight the animals knelt and prayed out loud using human speech. Another folk teaching proclaimed that at midnight on Christmas Eve, all water turns briefly into wine.

In past times people honored Christmas Day - Kaledos in Lithuanian - by scrupulously avoiding all forms of work. This meant that Christmas dinner had to be prepared the day before.

In times past many householders slaughtered their pigs at Christmas time, and pig’s head was a customary dish for Christmas dinner (see also Boar’s Head).

Upon waking, family members would take the straw that had lain on the table during the Christmas Eve feast and give it to their cows, sheep, and oxen — all animals that might have been present in the stable where Jesus was born.

Before they distributed the hay they examined it. If it had shed most of its grain, then that meant the family could expect a bountiful harvest in the year to come.

On the other hand, if snow hadn’t yet fallen by Christmas, then Easter Day was bound to be snowy.

In the nineteenth century groups of men went door to door on Christmas Day, singing hymns and dragging a Yule log behind them. Householders rewarded the men with Christmas treats. The carolers later set fire to the log outside the village.

In past times Christmas festivities involving parties and dancing began on the second day of Christmas, that is, St. Stephen’s Day (see also Twelve Days of Christmas).

Many people thought Christmas Day too holy for these kinds of activities and waited until the day after Christmas to gather together with their neighbors. People also took their oats to church to be blessed on this day.

In more recent times Christmas festivities began on Christmas Day. The celebrations lasted for several days, during which time custom forbade most types of work.

People thanked these well-wishers with Christmas treats. Kaledu Senis gave nuts to children and blessed homes by sprinkling grain in a special corner of the family’s dining area.

Today many Lithuanian families decorate their Christmas trees with geometrically shaped ornaments made from bent straws.

These ornaments, once used by Lithuanian peasants to beautify their homes for weddings and feast days, were adapted to the Christmas tree by Lithuanians living in the United States.

In past times Lithuanians decorated their trees with glass ornaments, candies, cookies, apples, and little toy figurines. When Christmas was over children consumed the edible ornaments.

Between the years 1940 and 1991 the Russian-dominated U.S.S.R (Union of Soviet Socialist Republics) occupied Lithuania.