The Principality of Liechtenstein is situated in Central Europe between Switzerland in the west and Austria in the east. Liechtensteiner cuisine is influenced by its neighbors' cuisines, the large variety of cheese dishes and the main ingredients of a local dish is cheese, meat and vegetables. 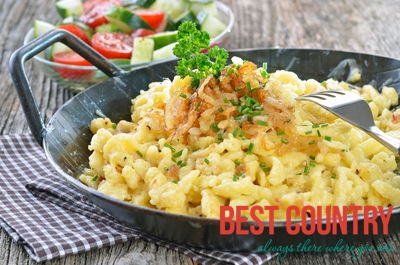 As for meat people from Liechtensteiner prefer pork butt, penis and pork products such as smoked bacon or ham and schnitzels.

There are numerous Liechtensteiner recipes adapted after French cuisine which require special ingredients such as cinnamon, vanilla, tomatoes, green beans, béchamel and velout.

There is also a large variety of fruits and vegetables used in Liechtenstein like tomatoes, potatoes, onions, muff cabbage, garlic, olives, pears, and apples.

Traditional Liechtensteiner meals include cheese, meat, wiskey, and bread. A main source of diet is Rebi made with cornmeal or a mixture of half cornmeal and half semolina and usually served with the main dish.

Other original dishes include Hafalaab, a dish made from wheat flour and cornmeal dumplings, with smoked Bacon or Ham in a broth.

As well schnitzels, smoked Pork and sauerkraut stews; cheese, meat, vegetable fondues, as asparagus which is one of the most popular vegetable, and a number of delicious deserts such as fruit-filled pancakes, rich pastries and cakes are some of the delicious Liechtensteiner recipes which make its cuisine very interesting and very tasty.

Although there are numerous recipes adapted after main central European cuisine, Liechtensteiner cuisine is seems to be original and mouth watering.

The Principality of Liechtenstein national day is on the fifteenth of August when it is honored the Royal family and the Assumption Day as well.

On the national holidays people gather around and serve traditional dishes and drinks. The most common dishes served on national celebrations are Spatzi, Alperrosti or Asparugus Canapes appetizer.