Beer in the Czech Republic 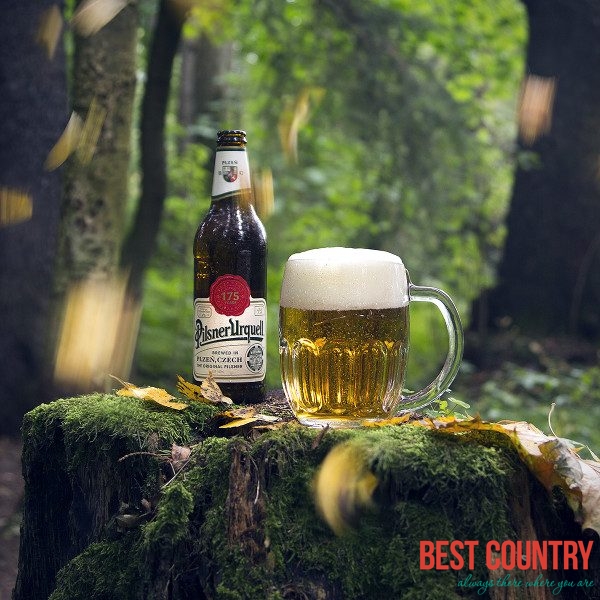 Beer in the Czech Republic (Czech: pivo) has a long and storied history. The first brewery is known to have existed in 1118.

The city of Brno had the right to brew beer from the 12th century, and the two cities most associated with Czech beer, Plzeň and České Budějovice (Pilsen and Budweis in German), had breweries in the 13th century.

The most famous Czech beer brands (and the most exported ones) are Pilsner Urquell, which was the world's first pilsner and pale lager beer, and Budweiser Budvar (in some countries trademarked as Budějovický Budvar or Czechvar).

The history of beer in the modern Czech Republic, historically Bohemia, Moravia and Silesia, goes back further than the creation of Pilsner Urquell in 1842. Before then Bohemia in particular was famous for its wheat beers, known in Czech as "světlé pivo" or "light beer" - the same term used in German "weissbier" or in Belgium "witbier".

Most towns had at least one brewery, the most famous brewing cities in Bohemia were Budweis, Plzeň and Prague. Other towns with notable breweries are Rakovník, Žatec and Třeboň.

Much of the early brewing history of Bohemia is centred around various monasteries, although today there are very few Czech monasteries brewing and selling beer to the public.

The city of České Budějovice was for centuries also known by its German name, Budweis. Brewing is recorded in the city since the 13th century.

The modern Budějovický měšťanský pivovar was founded in 1795 as the Bürgerliches Brauhaus Budweis, as such it is the oldest brewery in the world to use the term "budweiser" when referring to its beer.

In 1895 the Budějovický Budvar brewery opened as an ethnically Czech alternative to the German dominated Budějovický měšťanský pivovar.

In 1876, the US brewer Anheuser-Busch began making a beer which it also called "Budweiser." This led to the "Budweiser trademark dispute" between beer companies claiming trademarks rights to the name "Budweiser."

In the European Union, Budějovický Budvar is recognized as a product with Protected Geographical Indication.

Because of such disputes, Budvar is sold in the United States and Canada under the label Czechvar and according to the verdict of Court of Justice of the European Union in July 2010, Czech Budweiser Budvar has exclusive control over the Budweiser brand name in the whole European Union.

Pilsner Urquell was the first "pilsner" type beer in the world. In 1842, a brewery in Plzeň employed Josef Groll, a German brewer who was experienced in the Bavarian lager method of making beer.

Beer in Pilsen at the time was not of very good quality and they needed to compete. Groll developed a golden Pilsner beer, the first light coloured beer ever brewed. It became an immediate success, and was exported all over the Austrian Empire.

A special train of beer travelled from Plzeň to Vienna every morning. Exports of Czech beer reached Paris and the United States by 1874.

Today, beers made at Plzeňský Prazdroj are: Pilsner Urquell, Gambrinus and Primus.

Much of the brewing history of the Czech capital is connected to the various monasteries in the city, with brewing first recorded at the Benedictine Břevnov Monastery in 993AD.

It is also recorded that in 1088AD, King Vratislav II granted a tithe of hops to the Canons of Vyšehrad Cathedral in order to brew beer.

Today the Prague brewing scene is dominated by Staropramen, although there are several smaller breweries, the oldest being U Fleků, which was founded in 1499. Since the 1990s various brewpubs have been established in the city.

Beer in Brno and South Moravia

The region of South Moravia is known particularly for winemaking and there are only few breweries with a long tradition, namely Starobrno in Brno and Černá hora.

However, there has been a boom of microbreweries since the 2000s. Breweries Akciový Pivovar Dalešice, Pegas and Richard have been gaining country wide popularity, despite smaller production.

Nearly all beer brewed in the Czech Republic is pilsener lager. This varies in colour from pale (Světlé), through amber (Polotmavé) and dark (Tmavé) to black (Černé) and in strength from 3-9% abv. Top-fermented wheat beer (Pšeničné pivo) is also available.

According to Czech law, categories of beer, regardless of colour or style, are:

Originally Pilsner was a specific term for beers brewed in Plzeň (with Pilsner Urquell being registered as a trademark by the first brewery). The term has come to mean any pale, hoppy lager as a result of imitations of the original beer, especially in Germany where the style is common.

Pilsner Fest is a two day beer festival held each year by the Pilsner Urquell Brewery in Pilsen with music by local bands on four stages in the town.[6]

The Czech Beer Festival (Český pivní festival) in Prague is the biggest beer festival in Czech Republic held for 17 days every year in May, you can taste more than 70 best brands of Czech beer.