Czech cuisine has both influenced and been influenced by the cuisines of surrounding countries. Many of the fine cakes and pastries that are popular in Central Europe originated in the Czech lands. 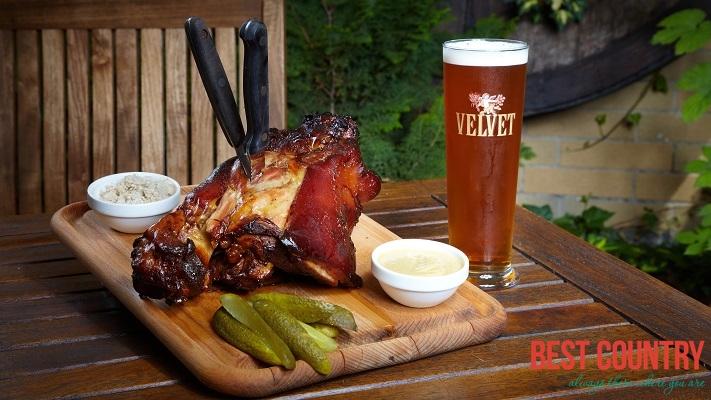 Czech cuisine is marked by a strong emphasis on meat dishes. Pork is quite common, and beef and chicken are also popular. Goose, duck, rabbit and wild game are served. Fish is rare, with the occasional exception of fresh trout and carp, which is served at Christmas. 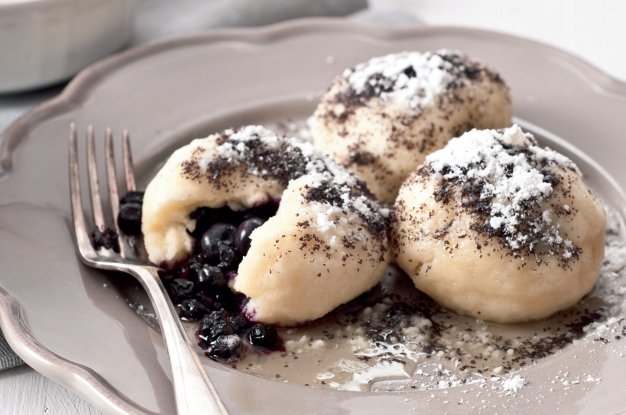 Knedlíky (steamed and sliced bread-like side dish) are one of the mainstays of Czech cuisine and are quite often served with meals. They can be wheat or potato based, and are sometimes made from a combination of wheat flour and stale bread or rolls.

In contrast to Austrian cuisine, the type that is large and served cut into slices (instead of smaller quenelles) occurs more often. The smaller dumplings are usually potato-based.

They can be prepared from scratch, from cabbage or from sauerkraut, which is most common. There are different varieties, from sour to sweet. Red or white cabbage can be used.

Marinated beef sirloin (svíčková na smetaně or simply svíčková). Braised beef, usually larded, with a thick sauce of carrot, parsley root, celeriac, and cream. This dish is often served with Knedlíky, chantilly cream, a teaspoon of cranberry compote, and a slice of lemon.

Since beer is a big part of Czech life, many popular Czech dishes and cheeses are usually eaten as pub fare.

Bramboráky (regionally called cmunda or vošouch in Pilsen and "strik" or "striky" in Czech Silesia) are fried pancakes made (very similar to rosti) of rough-grated or fine-grated raw potatoes (brambory in Czech), flour and sometimes sliced sausages (although this is not common, because bramboráky are usually intended to be a vegetarian meal) or sauerkraut.

They are spiced with marjoram, salt, pepper, and garlic, and usually sized to fit the cooking dish.

Smaller variants are often eaten as a side dish. There is a similar dish from the Slovakian-Ruthenian borderland called harula, which is prepared with less milk and fat, and the addition of an onion. Harula are baked on tin in an oven instead of frying.

Smažený sýr (colloquially smažák) is maybe the less noble, but the most contemporary of Czech national dishes.

A slice of cheese (usually Edam or Hermelín) about 1 cm thick (or, a whole serving of Hermelín) is coated in bread-crumbs like Wiener schnitzel and fried and served with tartar sauce (tatarská omáčka in Czech) and potatoes.

Nakládaný hermelín is a soft cheese, same family as brie and camembert marinated with peppers and onions in oil.

Pivní sýr (Beer Cheese) is a soft cheese, usually mixed with raw onions and mustard, and spread on toasted bread.

Olomoucké syrečky or "tvarůžky" is an aged cheese with a strong odour. It's made in Loštice, a small town in Moravia. The tradition of making this cheese dates back to the 15th century.

The company A.W. of Josef Wesselss started to produce it in 1876. Tvarůžky can be prepared in a number of ways—for example, you can fry it, marinate it, or add it to Bramboráky.

Soup plays an important role in Czech cuisine. Czech meals usually consist of two or more courses: the first course is traditionally soup, the second course is the main dish, and then other courses such as dessert or compote may follow.

Whole fruit, in some regions including the stones, are coated with potato or curd dough and steamed, then served with butter, sugar and sometimes milled poppy seed or tvaroh (rarely also with cream instead of melted butter).

Different varieties of fruit dumplings include strawberry, cherry, apricot, bilberry, or peach. They are usually eaten as a main dish.

Kolache (Koláče) is a type of yeast pastry consisting of fillings ranging from fruits to cheeses or poppy seed on doughnut. Buchty yeast pastry similar to Koláče, the same filling is wrapped in piece of dough and baked.

Vánočka is prepared for Christmas, along with many kinds of biscuits and sweets (vánoční cukroví). Vánočka is the same type of pastry as Jewish Challah.

With the exception of Koláče and vánoční cukroví, most sweets are consumed with coffee in the late afternoon, rather than immediately after a main meal.

Koláče are commonly eaten at breakfast.