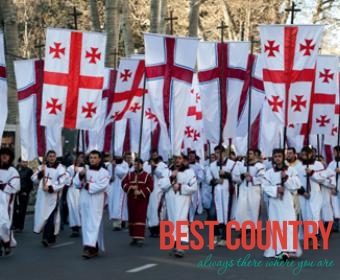 Georgians are of the Christian orthodox faith. In the first century, Christianity was first preached here by the apostle St Andrew.

From that time onwards, the number of Christians began to increase little by little.

However, Georgia remained a largely pagan country until the first half of the fourth century.

This was when St Nino from Cappadoccia arrived in the east Georgian Kingdom of Kartli with a mission to convert this country.

According to a well-known legend, St Nino came carrying a cross of vine branches bound together with strands of her own hair.

She succeeded in her mission so successfully that in 337 King Mirian declared Christianity to be the state religion.

Pagan idols were systematically destroyed and Christian churches and monasteries were built in their place. During the second half of the fifth century, the Georgian Church obtained independence from the Patriarchate of Constantinople.

For over fifteen centuries, the Orthodox Church became an essential part of the Georgian spirit.

The Christian church became the main center of Georgian culture. The first works of Georgian literature date from the fifth century and are descriptions of the lives of martyrs written by ecclesiastics.

In the earliest centuries of Georgian church history, monks were the authors and copyist of manuscripts. The buildings of many Georgian churches, such as those of Svetitskhoveli and Alaverdi, are architecture masterpieces.

In 1921, Georgia was absorbed by Soviet Russia and became part of the USSR.

The Georgian church remained independent but faced much hardship. Many of the Georgian ecclesiastics, including members of the higher clergy, were arrested or even murdered by the Bolsheviks.

Nowadays, in the newly independent Georgia, there is the beginning of a restoration of church life.

True there are many difficulties along its path but it is a fact that Georgians now attend church worship. Georgians have always been tolerant towards other races and religions.

Now when representatives of both the Georgian parliament and the Patriarchate have reached an agreement between state and church, the Georgian Orthodox Church is also doing its utmost to have good relations with other Christian churches and also with other religions.

Catholic missionaries, who were often Italians, frequently visited our country in the 17th century. They lived here and left interesting records about Georgian life of these times. At various periods there were French, Italian, German and Polish Catholics in Georgia.

As for the Georgian Catholics, they live at present in southern Georgia. In the 17th century, when Turkey conquered this land, the local Georgians were Orthodox Christians.

The only way for them to remain Christian was to convert to Catholicism and this is what they did. The greatest event for Georgian Catholics was the visit of the Pope in Georgia.

For many years, Georgia was a haven for the Armenians. About 500,000 Georgians of Armenian origin now live in Georgia. They have always been well integrated into Georgian society and the Armenian Gregorian Church has always been able to function without persecution.

The first Jews appeared in Georgia twenty-six centuries ago. These were the ones who escaped from their country during the Babylonian conquest.

Ever since that time, Jews have lived in Georgia. We can state with pride that Georgia is a land where the Jews have never felt oppression.

They have always had rights equal to Georgians and have never been molested. When these people had the opportunity to leave for their newly restored country, beginning from the 1970s, some went but many remained.

Those Georgian Jews who now live in Israel have not lost contact with their former homeland. On the contrary, they often visit our country and invite their Georgian friends to Israel.

In the second half of the seventh century, when the Arabs first invaded the Caucasus, Islam was introduced into this region. Nowadays Islam is widely spread religion in the Caucasus.

In Georgia there are Muslims in the autonomous republic of Adjara where the adherents are Georgians and in lower Kartli where they are Georgians of origin.

In the first area some inhabitants whose ancestors received Islam during the 17th and 18th centuries have returned to Christianity. In the second area, the Muslims live mainly in the region of Marneuli, Bolnisi and Dmanisi.

Ever since Georgia established its present independence, these people of different confessions have shown themselves to be loyal and patriotic citizens of this country.

Of course it is not so easy to travel throughout Georgia in order to study the religious situation, but if one is interested, one need go no further than Meidani Square in Old Tbilisi.

Here, at a short distance from each other are located Georgian Orthodox and Armenian Gregorian Churches, a Jewish Synagogue and a Muslim mosque.

We Georgians say that this is a micro model of the whole of our country. It is a clear example of the great Georgian traditional and national toleration of religions and cultures.