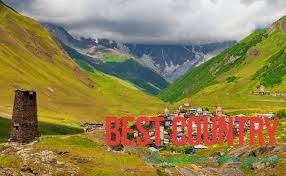 The climate of Georgia is extremely diverse, considering the nation's small size.

There are two main climatic zones, roughly separating Eastern and Western parts of the country. The Greater Caucasus Mountain Range plays an important role in moderating Georgia's climate and protects the nation from the penetration of colder air masses from the north. The Lesser Caucasus Mountains partially protect the region from the influence of dry and hot air masses from the south as well.

Much of western Georgia lies within the northern periphery of the humid subtropical zone with annual precipitation ranging from 1,000–4,000 mm (39.4–157.5 in). The precipitation tends to be uniformly distributed throughout the year, although the rainfall can be particularly heavy during the Autumn months. The climate of the region varies significantly with elevation and while much of the lowland areas of western Georgia are relatively warm throughout the year, the foothills and mountainous areas (including both the Greater and Lesser Caucasus Mountains) experience cool, wet summers and snowy winters (snow cover often exceeds 2 meters in many regions). Ajaria is the wettest region of the Caucasus, where the Mt. Mtirala rainforest, east of Kobuleti receives around 4,500 mm (177.2 in) of precipitation per year.

Eastern Georgia has a transitional climate from humid subtropical to continental. The region's weather patterns are influenced both by dry, Caspian air masses from the east and humid, Black Sea air masses from the west. The penetration of humid air masses from the Black Sea is often blocked by several mountain ranges (Likhi and Meskheti) that separate the eastern and western parts of the nation. Annual precipitation is considerably less than that of western Georgia and ranges from 400–1,600 mm (15.7–63.0 in).

The wettest periods generally occur during Spring and Autumn while Winter and the Summer months tend to be the driest. Much of eastern Georgia experiences hot summers (especially in the low-lying areas) and relatively cold winters. As in the western parts of the nation, elevation plays an important role in eastern Georgia where climatic conditions above 1,500 metres (4,921 ft) are considerably colder than in the low-lying areas. The regions that lie above 2,000 metres (6,562 ft) frequently experience frost even during the summer months. Because of its high landscape diversity and low latitude Georgia is home to a large number of animal species, e.g., about 1000 species of vertebrates (330 birds, 160 fish, 48 reptiles, 11 amphibians). A number of large carnivores live in the forests, e.g., Persian leopard, Brown bear, wolf, and lynx. The species number of invertebrates is considered to be very high but data is distributed across a high number of publications. The spider checklist of Georgia, for example, includes 501 species. Non-marine molluscs of Georgia also include high diversity.