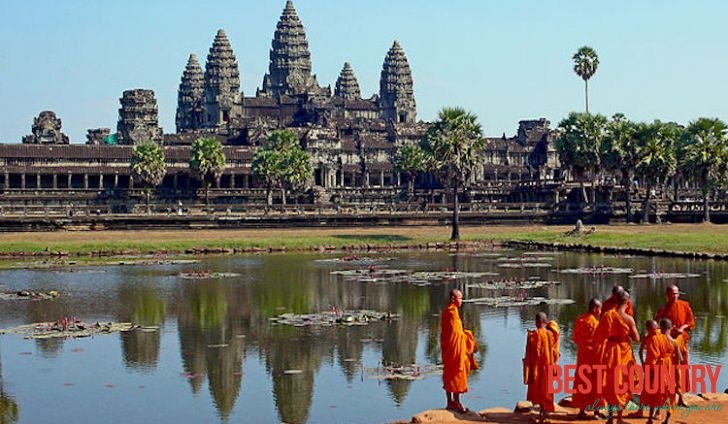 Thearavada Buddhism is the official religion in Cambodia which is practiced by 95 percent of the population-- just like that of Thailand, Burma, Sri Lanka.

However, Christianity and сBuddhist monks are being active and popular among a large number of population as well in the capital and provinces, showing a sign of growth. Daoism and Confuism are also commonly practiced among the Chinese people.

Buddhist monks are highly disciplined and must follow 227 rules in addition to the ten basic precepts of being a good Buddhist. Monks cannot take part in entertainment. They lead simple lives dedicated to Buddhism and the temple.

Buddhists see the universe and all life as part of a cycle of eternal change. They follow the teaching of Buddha, an Indian prince born in the sixth century B.C.

Buddhists believe that a person is continually reborn, in human or nonhuman form, depending on his or her actions in a previous life. They are released from this cycle only when thy reach nirvana, which may be attained by achieving good karma through earning merit and following the Buddhist path of correct living.

Earning merit is an important of Buddhist life. Buddhists in Cambodia earn merit by giving money, goods, and labor to the temples, or by providing one of the two daily meals of the monks.

Children often look after the fruits trees and vegetable gardens inside their local wat, or temple. Boys can earn merit by becoming temple servants or novice monks for a short time. Most young men remain monks for less than a year.