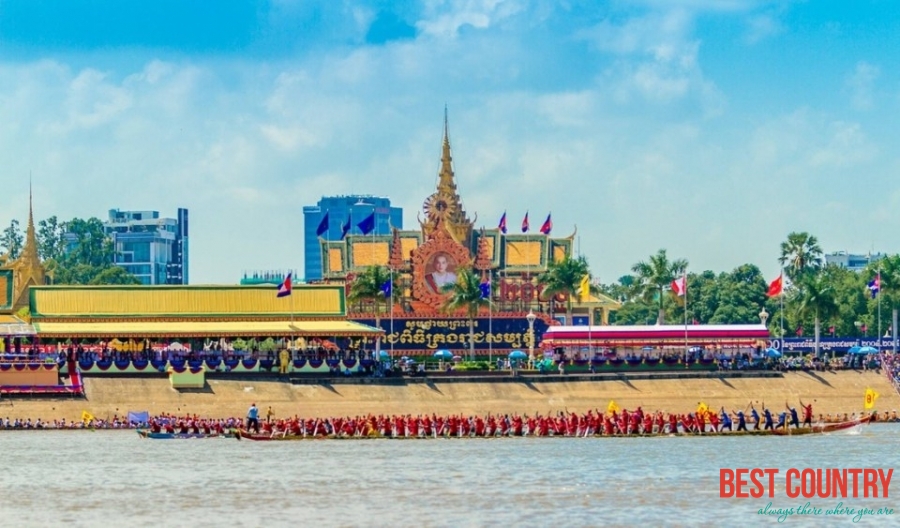 Cambodian holidays are inextricably intertwined with Theravada Buddhist ritual. The holidays that really count are Buddhist in origin - not even the Khmer Rouge could eradicate the practice of holidays like Pchum Ben.

Even the increasing presence of modern Western culture has done little to change the way the Cambodians celebrate the ebb and flow of life. Cambodian holiday celebrations are, and will always be, all about religion, tradition, and occasionally the Khmer's irrepressible sense of fun.

The Victory from Genocide Day celebrates the liberation of the Cambodian people from the genocidal grip of the Khmer Rouge - the word "liberation" somehow made ironic by the fact that this was only made possible by the invasion of the Khmer's traditional enemy, the Vietnamese.

Government events and rallies are held on this day to commemorate the Khmer Rouge's victims.

Meak Bochea celebrates the spontaneous visit of 1,250 monks to do homage to the Lord Buddha. The Buddha had retreated to Valuwan Vihara in the city of Rajagaha, whereupon 1,250 enlightened monks, the Buddha's own disciples, converged without prior appointment or agreement.

The monks heard the Buddha lay down the Buddha's three main principles: do good, abstain from bad actions, and purify the mind.

Meak Bochea happens on the full moon day of the third lunar month (Magha, corresponding to March on the Gregorian calendar). On this day, Buddhists celebrate Meak Bochea by joining candlelit processions within temples in their vicinity.

Cambodia grinds to a halt during New Year, drawing families together from all across the country into a celebration that turns wet and wild on the third day.

On the first few days, Cambodians will clean house, prepare food for blessing by the local monks, make merit at the local temple, and (for younger Cambodians) play traditional games with members of the opposite sex.

On the last day, as with similar new year celebrations in Thailand and Laos, young and old alike splash water upon one another to mark the occasion.

Vesaka Bochea is a single day that commemorates three events in the Buddha's life: his birth, enlightenment, and passing into Nirvana. On Vesaka Bochea, Buddhists offer prayers to the Buddha, and donate clothes and food to their local monks.

The Royal Ploughing Ceremony is a religious ceremony marking the beginning of the rice-planting season in Cambodia. On this day, the King's representatives plough a field in Phnom Penh with sacred cows, then divine the coming season based on what foodstuffs the cows eat afterwards.

The ceremony dates back to the mid-1200s, derived from an ancient Hindu ritual designed to ensure a good harvest. Cambodians believe the ceremony can account for events like floods, bumper crops, famine, and illness.

Pchum Ben, the Khmer Festival of the Dead, is actually the culmination of a fifteen-day observance called Dak Ben, throughout which Khmers are encouraged to visit at least seven pagodas to make offerings to dead ancestors and light candles to guide the spirits of the dead to these offerings.

Observant Khmers will also throw a rice-sesame seed mixture onto temple grounds. This observance helps feed the spirits of the ancestors who roam the world on Pchum Ben and are consequently hungry from not having eaten all year.

This holiday is especially poignant for the descendants of those killed by the Khmer Rouge, who pray at pagodas that house unidentified remains from those dark days.

This day marks the anniversary of Cambodia's independence from France in 1953. The celebrations are centered around the Independence Monument at the center of Phnom Penh, where the King lights a victory fire in the presence of the country's politicians, generals, and diplomats.

The celebrations also include cultural activities, parades down Norodom Boulevard, and fireworks in the evening.

The Cambodian Water Festival (Bon Om Touk) takes place once a year, on the full moon of the Buddhist month of Kadeuk (usually in November). It celebrates a major natural occurrence: the reversing flow between the Tonle Sap and the Mekong River.

This natural occurrence is celebrated in Cambodia with three days of festivals, fluvial parades, boat races, fireworks, and general merriment.

People come from far and wide to join the celebrations. Upwards of a million Cambodians attend the celebrations at Phnom Penh to take in the wholesome carnival atmosphere.

Food and drink overflow in the streets, Khmer pop bands entertain the crowds, and the riversides are packed to capacity with punters cheering their favorite boats on.