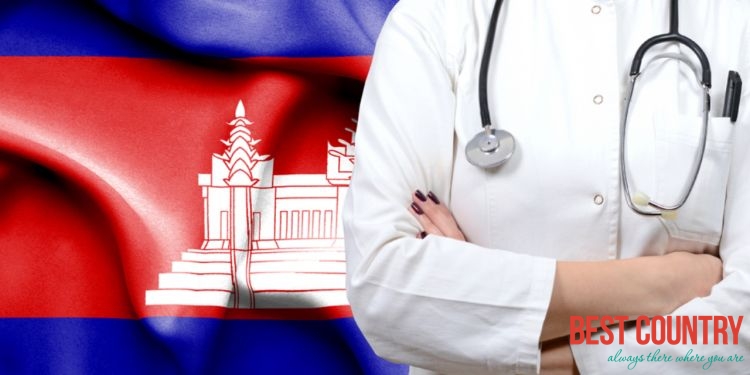 The Royal Cambodian Government plans to increase the quality of healthcare in the country by raising awareness of HIV/AIDS, malaria, and other diseases. Government spending on health care corresponded to 5.8% of Cambodia's gross domestic product (GDP).

In June 2011, the United Nations Population Fund released a report on The State of the World's Midwifery.

It contained new data on the midwifery workforce and policies relating to newborn and maternal mortality for 58 countries.

The under 5 mortality rate, per 1,000 births is 90 and the neonatal mortality as a percentage of under 5's mortality is 34.

The aim of this report is to highlight ways in which the Millennium Development Goals can be achieved, particularly Goal 4 – reduce child mortality and Goal 5 – improve maternal death.

In Cambodia the number of midwives per 1,000 live births is 6 and the lifetime risk of death for pregnant women 1 in 110.

Cambodia has been certified as a polio free country since October 2000.

Health indicators in Ratanakiri are the worst in Cambodia. Malaria, tuberculosis, intestinal parasites, cholera, diarrhea, and vaccine-preventable diseases such as measles are endemic.

Ratanakiri residents' poor health can be attributed to a variety of factors, including poverty, physical remoteness, language and cultural barriers that prevent Khmer Loeu from obtaining medical care, poor infrastructure and access to water, lack of accountability in the medical community, and exacerbating environmental factors such as natural resource degradation, decreasing food production, and internal migration.

The province has one referral hospital, 10 health centers, and 17 health posts. Medical equipment and supplies are minimal, and most health facilities are staffed by nurses or midwives, who are often poorly trained and irregularly paid.