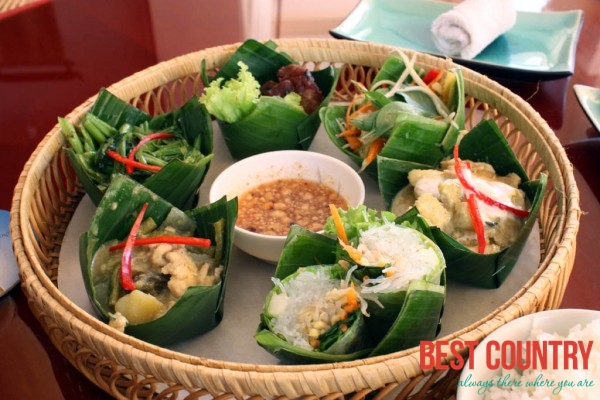 Cambodian culinary secrets are rarely written down; the recipes were instead handed down from mother to daughter. From an ancient origin has come a traditional cuisine of unsuspected treasures: a unique blend of flavors and colors that enhance the natural ingredients used.

Cambodians perfected the art of blending spice paste using many ingredients like cloves, cinnamon, star anise, nutmeg, cardamom, ginger and turmeric. They add other native ingredients like galangal, garlic, shallots, lemongrass, cilantro, and kaffir lime leaves to these spices to make a rather distinctive and complex spice blend known as “kroeung”.

Although noodles are also popular, almost every meal includes a bowl of rice. A wide range of curries, soups and stir fried are usually served with rice. Being in a country that produces many rice varieties, tourists can enjoy the best aromatic grains and various types of glutinous rice. The latter is more commonly served with a salad or in desserts with fruits.

There are two other unique ingredients that give Cambodian cuisines their fabulous typical flavour. One is a pungent fermented fish paste known as pra-hok and the other, the kapi, a fermented prawn paste.

These require an acquired taste for most but they are beloved by some who used them in many dishes or even taken as a dipping sauce. Collectively, these ingredients have become an important aromatic combination commonly used in Cambodian cuisines.

Typically, a Cambodian meal is served with rice and at least three other dishes. It usually includes a soup (samlor), served alongside the main dishes.

Each of the individual dishes will either be sweet, sour, salty or bitter; these exist side by side in harmony, sometimes even within a single dish, to offer an original melody.

Chili is usually left up to the individual to add. In this way tourists are subtly ensured that they get a bit of every flavour to satisfy their palates.