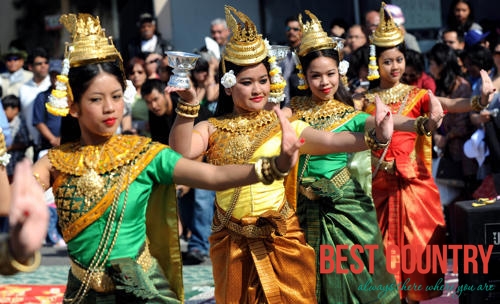 Cambodian New Year or the Chaul Chnam Thmey (New Year in Khmer-Cambodian language) is celebrated for three days. According to the Gregorian Calendar, it falls on April 13th or 14th . New Year in Cambodia represents the end of the harvesting season.

Everyday people visit temples to get blessings from monks and priests. They build a sand hill on the temple grounds and decorate it with five religious flags one on the top and four around the sides. This sand hill represents Buddha's five disciples.

People of Cambodia follow a tradition to sprinkle holy water on each others faces in the morning, on the chest at noon and on the feet in the evening.

These days people also pour colored water on their friends and relatives. Colored water symbolize different colors of life in future. Tradition of throwing powder on each other at the time of New Year is also very famous.

New Year in Cambodia is celebrated by performing various rituals and playing number of games. The three day New Year celebration include the following traditions:

The first day of the New Year is called Moha Sangkran. It is believed that on this day God's angels come to earth to take care of it's creation.

To welcome these holy angels, people clean and light up their houses. Members of the family place an idol of Lord Buddha on an altar with flowers, candles, incense sticks, a bowl of scented water, eatables, drinks and shaped out banana leaves.

Food prepared at the time of Moha Sangkran is offered to monks and priests of the temples.

On the second day of Khmer New Year celebrations, people offer charity and alms to the poor. It is also considered good to present gifts to family members and relatives. At some official places, employees get gifts and other monetary incentives.

On the third day of New Year celebrations people wash all the idols of Lord Buddha with scented water. It is said this ensures good rains all year long.

Children pay respect to their elders by washing their feet and get blessings in return. This ceremony of giving a special bath to Buddha statues, monks and elders is called Pithi Srang Preah.

After performing all rituals and customs to welcome the New Year, it's time to have some fun. Some physical activities become part of New Year celebrations. Popular games played at the time of New Year in Cambodia are listed below:

In this game, a ball is thrown and caught with one hand while catching sticks (pens, chopsticks) with the other hand.

Played on the night of day one by group of boys and girls standing opposite to each other. One group throws the Chol Chhoung (Khmer scarf ball) on the other and if someone gets hit by the ball then the whole group dances to get the Chhoung back while the other group sings.

In this game, one imitates as a hen protecting her chicks from a crow. It is played on the first night of the New Year. The crow tries to catch as many chicks as possible while both the groups sing a song of bargaining.

This game is played by the groups of boys and girls. Each group throws their angkunh (an inedible fruit seed) to hit the angkunh of the other group. The winners must knock the knee of the losers with the angkunh.

It is mostly played by a group of children. They sit in a circle. Someone holds a kanseng (Cambodian towel) twisted in a round shape and moves around the circle. The child moving around the circle secretly keeps the kanseng behind one of the children. If the chosen child realizes the kanseng behind him then he must beat the person sitting next to him.

It is a game of two children. Ten holes are dug into a board in the ground . 42 stones are required to start the game. Five stones are put into each of the two holes located at the tip of the board and four stones are put in the remaining holes.

Similarly, second player starts playing the game and the game ends when all the holes are empty. The player with the maximum number of stones is the winner.