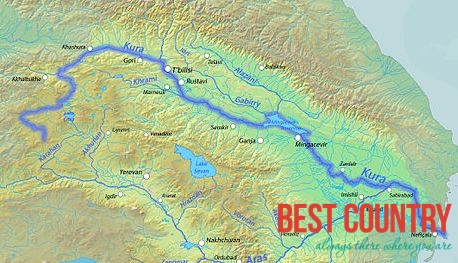 The water bodies of Azerbaijan were formed over a long geological timeframe and changed significantly throughout that period. This is particularly evidenced by remnants of ancient rivers found throughout the country. The country's water systems are continually changing under the influence of natural forces and human introduced industrial activities. Artificial rivers (canals) and ponds are a part of Azerbaijan's water systems.

The hydrography of Azerbaijan basically belongs to the Caspian Sea basin.

Rivers form the principal part of the water systems of Azerbaijan. There are 8,359 rivers of various lengths within Azerbaijan. Of them 8,188 rivers are less than 25 kilometers in length.

Only 24 rivers are over 100 kilometers long. The largest rivers that flow through the country are:

The rivers in Azerbaijan can be divided into three groups:

The average density of the river system of Azerbaijan is 0.39 km/km². The density is even lower than 0.05 km/km² in the plains.

The Kura and Aras are the most popular rivers in Azerbaijan, they run through the Kura-Aras Lowland. The rivers that directly flow into the Caspian Sea, originate mainly from the north-eastern slope of the Greater Caucasus and Talysh Mountains and run along the Samur-Devechi and Lenkeran lowlands.

The Kura River basin area (86,000 km²) up to the junction with the Aras River is smaller than the Aras water basin (101,937 km²). The river is still called Kura on the junction because the water level of the Kura is twice as high as that of the Aras River.

Over 60 water reservoirs have been constructed in order to regulate the river flow in Azerbaijan.

The formation of these reservoirs is one of the measures that has been undertaken in order to ration the utilization of water and energy resources. The largest water reservoirs are:

The reservoirs in Azerbaijan are designed to be utilized for various purposes, while most other ponds are used exclusively for irrigation.