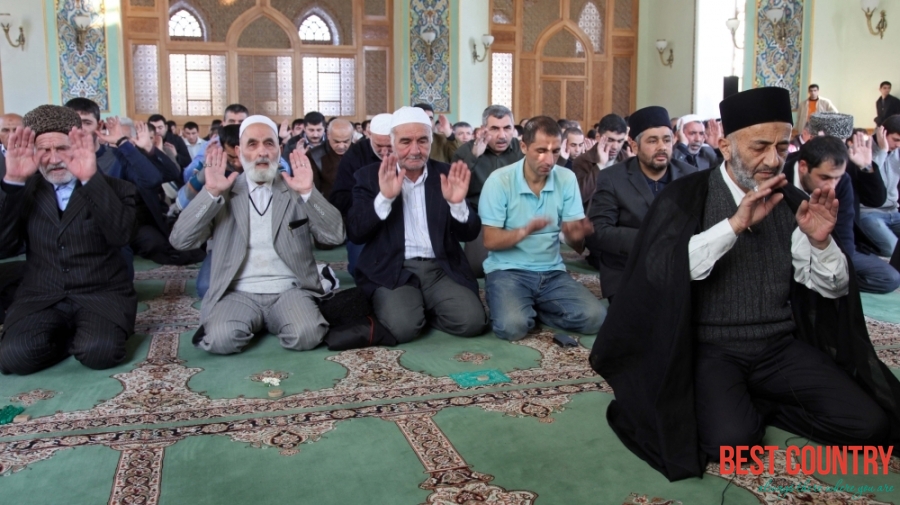 The religions of Azerbaijan comprise different religious trends spread among the people and ethnic groups residing in the country. There are several confessions in Azerbaijan.

Around 99 percent of the population are Muslims. 85% of the Muslims are Shia Muslims and 15% Sunni Muslims,and the Republic of Azerbaijan has the second highest Shia population percentage in the world after Iran. In Baku there is the Hindu Fire Temple of Baku ("ateshgah") with an "old" structure which, according to travellers, has been a place of visit for Hindu priests for more than a millennium. The place is often "misrepresented as a Zorostrian fire-temple" due to frequent association of "fire temple" with the Iranian religion of Zorostrianism. There are some other faiths practiced among the different ethnic groups within the country. By article 48 of its Constitution, Azerbaijan is a secular state and ensures religious freedom. Of the nation's religious minorites, Christians are mostly Russian and Georgian Orthodox and Armenian Apostolic (Almost all Armenians live in the break-away region of Nagorno-Karabakh).

In 2003 there were 250 Roman Catholics. Other Christian denominations as of 2002 include Lutherans, Baptists and Molokans. There are also Jewish, Bahá'í, Hare Krishna and Jehovah's Witnesses communities, as well as adherents of the Nehemiah Church, Star in the East Church and the Cathedral of Praise Church.