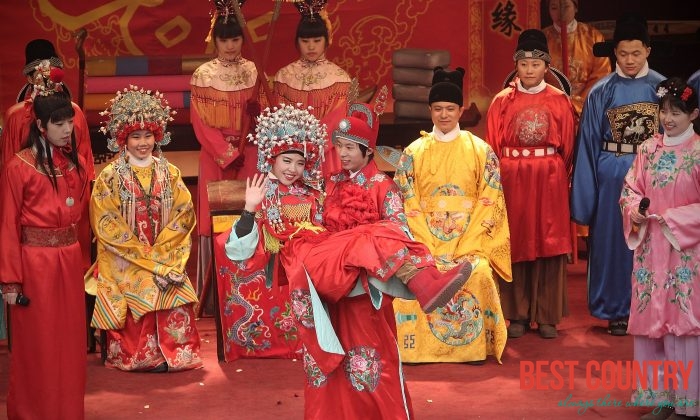 Wedding's in Hong Kong include many traditions that are handed down from generation to generation in China.

But depending on what province they are from in China they observe very different forms of this tradition.

Also the western influence has brought about many changes. In the past it has been the Chinese custom for a boy's parents to contact a girl's parents by means of a mediator to arrange a marriage, before the young couple have ever met.

However, courting today in Hong Kong is usually done Western style. Nowadays when a couple who are dating decide to get married, usually the boy goes to the girl's parents about the matter.

Sometimes the boy's parents, or in some rare cases a mediator known by both families, will intercede for the boy.

During this contact between the two families the wedding details, dowry and other requirements are discussed. In these considerations the girl's parents have the primary say.

When it is time to set the date, parents may consult a fortune-teller who may pick a "lucky day."

Or the "lucky day" may be arrived at by looking in the Chinese almanac. This is basically a book of astrology listing each day of the year and what should or should not be done on that day.

"Good luck" is considered very important by both non-Christians and even members of Christendom's religions in Hong Kong.

They do everything possible to bring good luck on this special occasion. Once the wedding date is set, the bargaining starts on what might be called the bride price or dowry.

The dowry usually is a set amount of money paid directly to the girl's parents, or for a restaurant wedding feast.

The girl's parents customarily stipulate the number of tables as well as what some of the feast courses must include, such as mushrooms, and chicken.

The bride's family may also require that a certain number of catties (pounds) of wedding cake be delivered on a "lucky day" before the wedding for distribution to friends and relatives.

Usually the bargaining ends in an amicable settlement, with compromises on both sides.

Sometimes, however, breaches in the relationship occur, even resulting in the calling off of the wedding. Or the in-laws may have separate feasts.

Of course, the boy's parents are concerned about the money involved, since they often help their son to pay the dowry, and sometimes assume all the cost.

After bargaining in connection with the wedding is over, there is frequently a discussion regarding what the girl's parents are going to give the newlyweds.

Sometimes it is furniture for the new home, except the wedding bed, which only the boy is to buy. If the girl's parents are well-to-do, they may provide an apartment with the rent paid for one year, or, in some cases, paid in full.

When the wedding day finally arrives, the groom first goes to get his bride. When he arrives, friends and members of the family may not let him in unless he first pays "luck money."

This money, placed in red packets, is given to the one who opens the door or to everyone in the house. It is only after payment that the groom may receive his bride.

Next, the wedding party may head to the marriage registry for the ceremony.

In Hong Kong, couples can only be legally registered as married at one of the government registry offices, or by going to one of the few large churches authorized for this purpose.

The couple must apply well in advance to have the ceremony performed at the registry office on the date and time they wish. So there are no late brides here, or they miss their turn!

Some people in Hong Kong, however, may want to be married on a "lucky day," but find they are too late to get their marriage registered on that day.

So they choose to have a customary Chinese wedding, and then, in the meantime, live together before having their marriage registered.