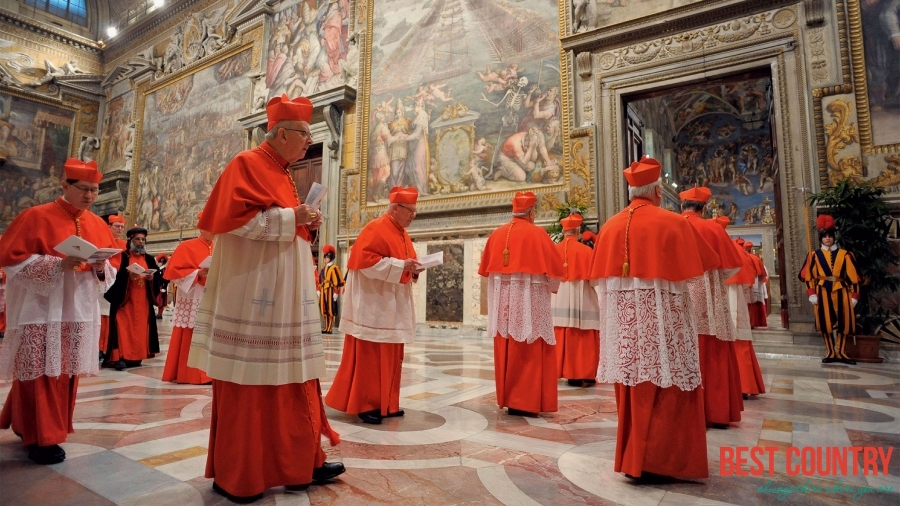 The government of Vatican City has a unique structure. The Pope is the sovereign of the state. Legislative authority is vested in the Pontifical Commission for Vatican City State, a body of cardinals appointed by the Pope for five-year periods.

The state's foreign relations are entrusted to the Holy See's Secretariat of State and diplomatic service.

Nevertheless, the pope has full and absolute executive, legislative and judicial power over Vatican City. He is currently the only absolute monarch in Europe.

There are specific departments that deal with health, security, telecommunications, etc.

The Cardinal Camerlengo presides over the Apostolic Camera to which is entrusted the administration of the property and the protection of the temporal rights of the Holy See during a papal vacancy.

Those of the Vatican State remain under the control of the Pontifical Commission for the State of Vatican City.

Acting with three other cardinals chosen by lot every three days, one from each order of cardinals (cardinal bishop, cardinal priest, and cardinal deacon), he in a sense performs during that period the functions of head of state. All the decisions these four cardinals take must be approved by the College of Cardinals as a whole.

The nobility that was closely associated with the Holy See at the time of the Papal States continued to be associated with the Papal Court after the loss of these territories, generally with merely nominal duties (see Papal Master of the Horse, Prefecture of the Pontifical Household, Hereditary officers of the Roman Curia, Black Nobility).

They also formed the ceremonial Noble Guard. In the first decades of the existence of the Vatican City State, executive functions were entrusted to some of them, including that of Delegate for the State of Vatican City (now denominated President of the Commission for Vatican City).

But with the motu proprio Pontificalis Domus of 28 March 1968, Pope Paul VI abolished the honorary positions that had continued to exist until then, such as Quartermaster General and Master of the Horse.

The State of the Vatican City, created in 1929 by the Lateran Pacts, provides the Holy See with a temporal jurisdiction and independence within a small territory. It is distinct from the Holy See. The state can thus be deemed a significant but not essential instrument of the Holy See.

The Holy See itself has existed continuously as a juridical entity since Roman Imperial times and has been internationally recognised as a powerful and independent sovereign entity since late antiquity to the present, without interruption even at times when it was deprived of territory (e.g. 1870 to 1929).

The Holy See has the oldest active continuous diplomatic service in the world, dating back to at least AD 325 with its legation to the Council of Nicea. Ambassadors are accredited to the Holy See, never to the Vatican City State.

The Pope is ex officio head of state of Vatican City, functions dependent on his primordial function as bishop of the diocese of Rome.

The term Holy See refers not to the Vatican state but to the Pope's spiritual and pastoral governance, largely exercised through the Roman Curia. His official title with regard to Vatican City is Sovereign of the State of the Vatican City.

The Pope resides in the Papal Apartments of the Papal Palace overlooking off Saint Peter's Square. It is here he carries out his business and meets foreign representatives.

The current Pope is Benedict XVI, born Joseph Alois Ratzinger in Bavaria, Germany. Italian Cardinal Giovanni Lajolo serves as President of the Pontifical Commission for the State of Vatican City. He was appointed by Pope Benedict XVI on 11 September 2006.

Its seven members are cardinals appointed by the Pope for terms of five years. Acts of the commission must be approved by the pope, through the Holy See's Secretariat of State, and before taking effect must be published in a special appendix of the Acta Apostolicae Sedis.

Most of the content of this appendix consists of routine executive decrees, such as approval for a new set of postage stamps.

Important actions of the Governorate must be confirmed by the Pontifical Commission and by the Pope through the Secretariat of State.

The Governorate oversees the central governmental functions through several departments and offices.

The directors and officials of these offices are appointed by the pope for five year terms. These organs concentrate on material questions concerning the state's territory, including local security, records, transportation, and finances.

Judicial functions are delegated to a supreme court, an appeals court, a tribunal, and a trial judge. In all cases, the pope may choose at any time to exercise supreme legislative, executive, or judicial functions in the state.