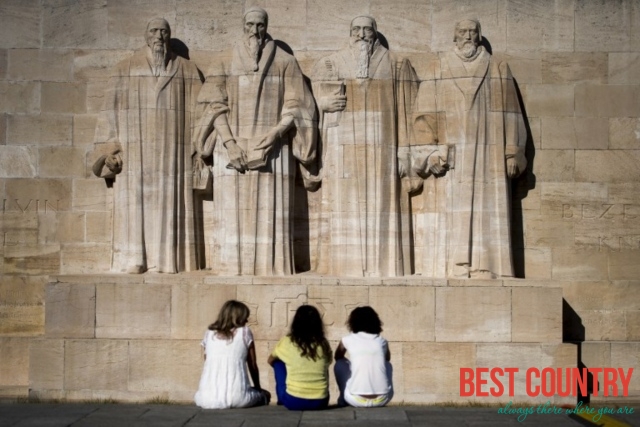 Christianity is the predominant religion of Switzerland (72.1% of total resident population). 20.1% of the total population are irreligious. The largest minority religion is Islam (4.5%, figures as of 2010).

The two major religious confessions are the Roman Catholic Church (38.8% of the population as of the 2010 census) and the Swiss Reformed Church (30.9%). The country is historically about evenly balanced between Catholic and Protestant regions.

The larger cities (Bern, Zurich, Basel, Geneva) were and partly still are Protestant, while Central Switzerland and the Ticino are traditionally Catholic. 11.1% of the Swiss were irreligious.

Swiss Jews had been given full political rights in 1866, although their right to settle freely was implemented as late as 1879 in the canton of Aargau.

The current Swiss Constitution of 1999 makes explicit both positive and negative religious freedom in Article 15,

paragraph 4, which asserts that nobody can be forced to either adhere to a religious confession or to attend religious education, thus explicitly asserting the right of apostasy from a previously held religious belief.

The basic right protected by the constitution is that of public confession of adherence to a religious community and the performance of religious cult activities.

Article 36 of the constitution introduces a limitation of these rights if they conflict with public interest or if they encroach upon the basic rights of others.

Thus, ritual slaughter is prohibited as conflicting with Swiss animal laws. Performance of cultic or missionary activities or religious processions on public ground may be limited.

On the other hand, the use of cantonal taxes to support cantonal churches has been ruled legal by the Federal Supreme Court.

It is disputed whether the minaret ban introduced in Article 72 of the Swiss Constitution in 2009 constitutes a further limitation of the freedom of religion.