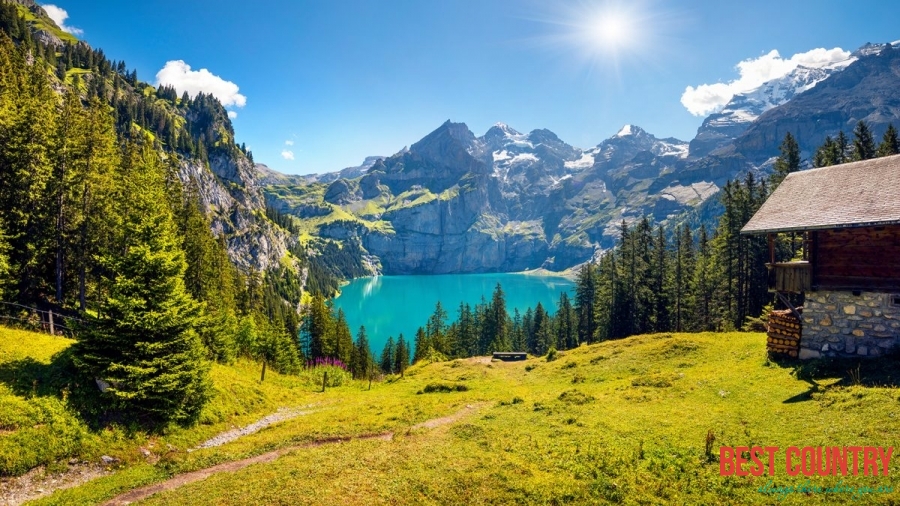 The Swiss climate is generally temperate, but can vary greatly between the localities, from glacial conditions on the mountaintops to the often pleasant near Mediterranean climate at Switzerland's southern tip.

Summers tend to be warm and humid at times with periodic rainfall so they are ideal for pastures and grazing. The less humid winters in the mountains may see long intervals of stable conditions for weeks, while the lower lands tend to suffer from inversion, during this periods, thus seeing no sun for weeks.

A weather phenomenon known as the föhn (with an identical effect to the chinook wind) can occur at all times of the year and is characterised by an unexpectedly warm wind, bringing air of very low relative humidity to the north of the Alps during rainfall periods on the southern face of the Alps. This works both ways across the alps but is more efficient if blowing from the south due to the steeper step for oncoming wind from the south. Valleys running south to north trigger the best effect. The driest conditions persist in all inner alpine valleys that receive less rain because arriving clouds lose a lot of their content while crossing the mountains before reaching these areas. Large alpine areas such as Graubünden remain drier than pre-alpine areas and as in the main valley of the Valais wine grapes are grown there.

The wettest conditions persist in the high Alps and in the Ticino canton which has much sun yet heavy bursts of rain from time to time. Precipitation tends to be spread moderately throughout the year with a peak in summer. Autumn is the driest season, winter receives less precipitation than summer, yet the weather patterns in Switzerland are not in a stable climate system and can be variable from year to year with no strict and predictable periods.