Quality of ingredients and simplicity in preparation and serving of foods are typical of Swiss menus. There is stress on the importance of soups and many dishes made from cheese. Much bread is consumed and is a apart of all meals. Meats and fish are often expensive so are purchased and cooked with care, often extended with vegetables or cereal foods. 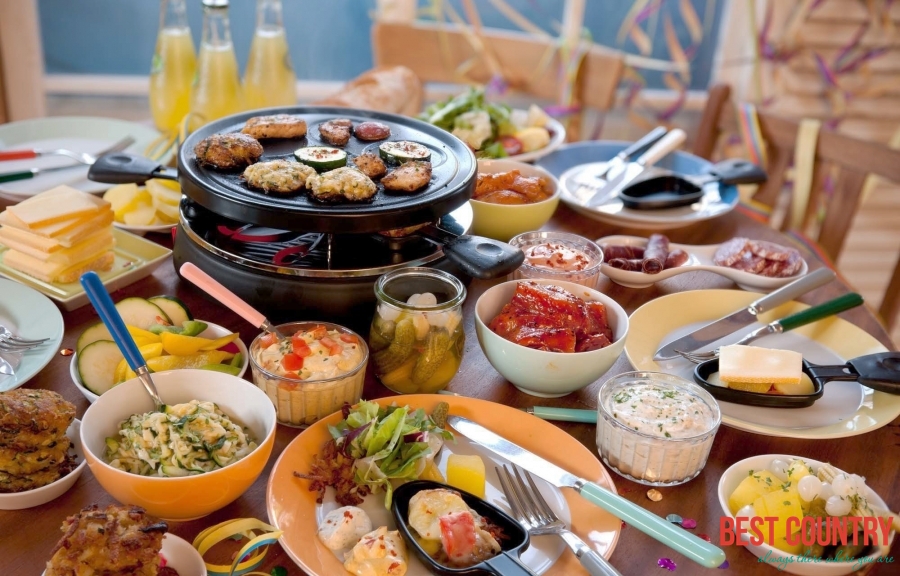 Staple foods include bread, potatoes, and cereals with a good consumption of milk and cheese. Favorite methods of food preparation are soups, stews, and simple casserole dishes.

There is no shortage of quality dairy products in the Swiss diet.

Fresh milk is almost a staple food in the form of coffee and milk (cafe au lait or milchkaffee) which is served so frequently that it is considered more of a food than a mere beverage.

Milk and cheese are almost daily a part of soups or quick dishes that make up light meals, while the fondues and raclettes of Switzerland are well known as a Swiss dish consisting of melted cheese in wine or cider.

There is scarcely a canton in Switzerland without its own special version of a cheese soup: thick, thin or baked with bread as a pudding or casserole.

Cheese is also an integral ingredient in soufflés, sauces, dumplings, fritters, croquettes. and garnishes as well as pies and tarts. One of the oldest traditional dishes is fanz, made like a thick white sauce with flour, milk, and butter and then eaten with bread and cafe au lait.

Orchards abound in Switzerland, but when fresh fruits are scarce, much use is made of canned or dried fruits. Fruits are served fresh in season, stewed, or made into puddings or tarts.

Apples and cherries are special favorites and these are made into fritters (fnutli, Basel apple fritters, or chriesitutschli, fresh cherry bunches clipped in batter and delicately fried), puddings or fruit soups.

A bowl of stewed fruit accompanied with cafe an lait is a popular finish to a meal. More recently fruit and yogurt combinations have been gaining in popularity.

Green beans, spinach, Swiss chard, turnips, leeks, asparagus, cabbage, squash, and many other vegetables are available in profusion but none can reach the popularity or versatility of the potato.

But one potato dish is supreme: kartoffelrosti. This dish is so popular it is known everywhere as simply rosti. Mealy parboiled potatoes are coarsely shredded, then are packed into a large hot skillet sputtering with butter.

When the bottom is crisply browned the whole cake is inverted (easy if inverted on a platter held over the pan, then slid carefully back) to brown the second side.

Served in wedges, the crisply browned rosti accompanies almost any meat, fish, or even cheese dish and often stands alone as a light supper.

Meat, fish, and game are expensive in Switzerland and are purchased, cooked, and eaten with care and respect.

The amount consumed depends very much on the family income, but traditional frugality usually results in every part of the meat being carefully used.

Fats will be rendered, bones and trimmings will make soups, and meat will be generously accompanied with vegetables or cereals such as rice, cornmeal, or pasta to extend the meaty flavor.

In many areas, meat is for Sundays only, while the poor may taste it only once in a year. Only recently have rotisseurs (restaurants specializing in expensive broiled or roasted meats) become popular.

Part of the reason may be that Swiss cattle are raised mainly as milk cows and work animals with the result that their flesh is too often tough and stringy and best suited to soup-making and the long simmering of stews or the well-seasoned mixtures that make sausages.

Swiss sausages are so varied and so popular that they probably represent the favored form of meat, and there is a type of sausage for every taste and use from mild to spicy, whether for snacking, picnicking, leisurely dining or light suppers.

Meats used include veal and beef, pork, venison and kid. Chickens, affectionately called guggeli or mistkratzerli (manure-scratchers) in German-speaking Switzerland, form the base of many a soup or stew.

Fish is not a staple, but is considered a delicacy. It is cooked with simplicity: usually simply baked or poached and served with butter or lemon. Trout, salmon, perch, and pike as well as eels and scampi are available, but largely only in the cities.

Eggs and legumes are seldom eaten as individual dishes; mostly they are consumed as ingredients. Eggs are a part of most cheese and milk baked casseroles as well as soufflés, omelets and pancakes. Dried peas and beans are used in lesser quantities in soups.

It is almost an impossibility to think of a Swiss table set for a meal without bread.

Breads and rolls are often the main part of breakfast, they accompany soups, they crumble or cube into casseroles and puddings with cheese or fruits or even vegetables, they are squeezed with water or milk to form stuffing. dumplings, fritters, and chunks of bread are clunked into cheese fondues, and even mop up creamy sauces and gravies.

Cereals have been a Swiss food staple from earliest times. Gruels, porridges, and soups made from grains and flour are seldom used anymore except for the one traditional dish that has survived: fanz. Now popular mostly with shepherds, it is a thick white sauce made with milk, flour, and butter and served with bread and milchkaffee and is considered a satisfying meal.

Noodles and many pasta forms are served in the Italian way and also in typically Swiss style: cooked noodles tossed with butter-browned onions and sprinkled with cheese. Pasta is also a frequent ingredient in soups and a popular means of stretching meat dishes.

In the area of Ticino (close to Italy), cooked cornmeal or polenta is frequently served as a bread, side dish, or as part of a baked dish with cheese. Rice is gaining in popularity and used as an emergency staple because of its versatility and excellent keeping qualities.

Not to be overlooked is the increasing use of whole grains in breads, rolls, and especially in the popular breakfast dish of toasted oats, shredded dried fruit, and nuts served with milk or yogurt called muesli.

Considerable fats are consumed in the form of cream and of course in the many varieties of cheese.

Butter is favored for baking and cooking because of its flavor and abundant good quality, but the efficient homemaker makes good use of all fats whether beef drippings, chicken fat, lard or bacon fat. Oils are not widely used for cooking but are a salad dressing ingredient.

Confiseries, those exquisite pastry shops, are located frequently enough in the cities to defy any resistance.

A definite Swiss sweet tooth does exist, but it is more often assuaged by bread and butter with jam, or a "sweet supper" (pancakes or dumplings with sweet sauce) than with ornate rich pastries.

Chocolate, however, to the Swiss mind is more food than treat and will often be a part of a child's lunch or a hikers pack for "quick energy".

Depending on the area and the predominating influence, the spice shelf in the Swiss kitchen may look more familiar to a German, French, or Italian cook. Dill, caraway, garlic, tarragon, white wine or tomatoes, garlic, basil, oregano or even a melange of all may be used in the Swiss kitchen.

Overall, Swiss foods are well cooked and not strongly flavored. Much use is made of Maggi, a seasoning sauce similar in taste and color to soy sauce, and Aromat or Fondor – popular trade names for monosodium glutamate, all of which are used frequently and sometimes overdone.

But the array of bottles, jars, and tubes of condiments, spices, and herbs makes cooking in any language possible and probable in Switzerland.