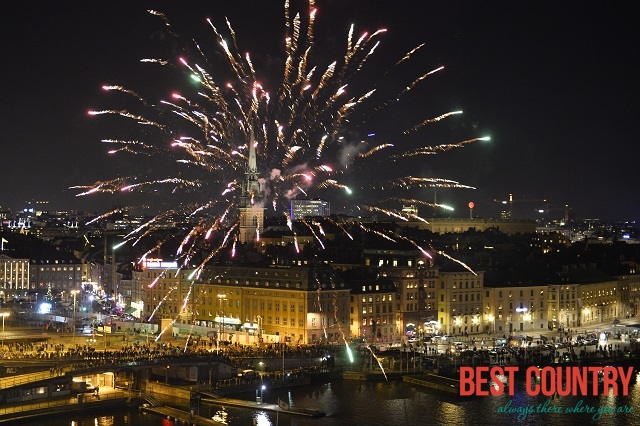 Sweden celebrates its New Year on January 1, according to Georgian calendar. During the time of New Year, Sweden is under extreme cold climatic conditions, even colder than the weather during Christmas.

It creates a big impact over the celebrations planned for the time. Everyone moves out only after getting covered up from head to toe. However, everyone believes it to be not as cold as it seems to be, so that they can utterly celebrate the time.

On New Year’s Eve in Sweden, most of the celebrations are planned within the house, along with family and friends. However, it can be more referred as a festival people like to spend with friends rather than families, as opposite to the Christmas festival.

As most of the celebrations occur within the four private walls, a foreigner to the land might wonder about the way, people in Sweden celebrate New Year.

However, if one is lucky to be invited to any such celebrations, one can clearly sense the charming atmosphere, as well as a perfect mixture of the modern Sweden living a continental lifestyle, and their unbroken association with old traditions.

New Year celebrations are prolific, flamboyant, and modern in its approach.

The celebrations planned at home include preparing special dishes for the evening. Also, everyone makes sure to keep the house as clean as possible, put up the best dinner table cloth, and wear newly bought clothes.

On the dinner table, everyone present put across views and stories of the past year, and hopes and aspirations for the coming year. Everyone promises themselves to grow up as good human beings in the coming year.

At the stroke of the midnight, there is a tradition of making a self resolution for the year ahead. Also, people raise toasts of champagne, and some others move out of their houses to set off firecrackers to raise their gusto.

Many people keep their television on during that time, to have a view of the Skansen open air museum.

On the midnight of New Year, bells are chimed and New Year’s verse of ‘Ring out, Wide Bells’ is recited.

This tradition goes back to the time of the late nineteenth century and more precisely to the year of 1895, when this poem pended down by the English poet of Tennyson was first time recited on New Year’s Eve.

Live telecast of the same holds the largest viewership for the evening in Sweden.

Post midnight time on New Year’s Eve, people do raise their scales of courage to go out in the cold and be a part of the community celebrations.

Some others prefer to be mere spectators of the community fireworks show, or the firecrackers set off by the people in the neighborhood or street.

Stockholm, the capital city as well as the largest city of Sweden, is in fact the host of the largest and grandest New Year’s Eve celebrations on community level.

It offers several exciting options for one to choose from. Gamla Stan, the Old Town of Stockholm is one favorite place for visitors as well as natives on New Year’s Eve. It hosts an evening music concert at Storkyrkan Church.

The Skansen open air museum, as mentioned above, puts up a great show of music (Ring out, Wide Bells), entertainment, and fireworks.

Those looking to move out of the bracket of routine and conventional celebrations can let their adventurous side have some contentment with the ice-skating in Kungstradgarden.