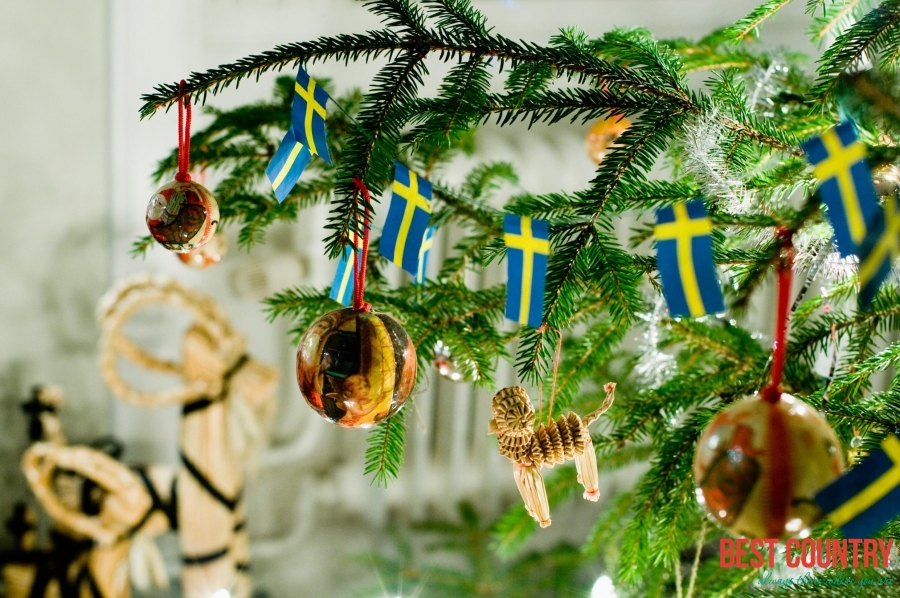 The biggest and longest holiday of the year is the magical Christmas of Sweden. The excitement begins the first Sunday of Advent with the lighting of the first Advent candle. Each Sunday prior to Christmas, another candle is lit with growing anticipation.

Feasting and celebrating begin on December 13 with Lucia Day, which legend says is the longest night of the year and a time when man and beast need extra nourishment.

In years past when the celebration took place in the home, Lucia (Queen of Light) was portrayed by the eldest daughter.

She was dressed in a white gown with a crown of candles in her hair. She would wake her parents by singing the familiar Italian song "Santa Lucia" and bring them coffee, buns, cookies, and occasionally "glogg" (a mulled wine).

Today, nearly every town, school, and day-care center has their own Lucia. There is also an official popular election to choose a Lucia to preside at the big parade in Stockholm.

Introduced in Sweden from Germany, the Christmas tree has been a part of Christmas in Sweden since the 1700s.

It was not until the present century that the custom became general, however. Nearly every Swedish household now brings in a tree one or two days before Christmas and decorates it with sparkling objects, gaily wrapped candies, glass bulbs, and straw ornaments, with electric lights or candles.

Christmas Eve, then is the height of the festivities. Traditionally it is a day when no work should be done other than seeing to one's livestock.

This is the day of the Christmas feast, which comprises a smцrgеsbord including a few traditional dishes such as ham, jellied pigs feet, lutfisk and rice porridge.

Lutfisk (sun-cured cod served in cream sauce) is most likely a throwback to a period of fasting from pre-Reformation times.

The Christmas feast also includes a tradition called "dipping in the kettle" (doppa i grytan), in which the assembled family and guests dip bits of dark bread in a pot filled with drippings of pork, sausage, and corned beef.

Symbolically this calls to mind, in the midst of thanksgiving and plenty, all those who are in need and hunger.

After dinner all gather around the Christmas tree to open presents. These gifts are brought by the Jultomten, a gnome who lives in the barn, if there is one, and is very similar to the Danish Nisse.

The Jultomten is credited with looking after the family and their livestock. Toward the turn of the past century a Swedish artist began producing greeting cards illustrated with gnomes.

Her figures were a tremendous success and soon the Jultomten had assumed a role comparable to that of the various Santa Claus figures in other countries. He is believed to come with presents.

In many households nowadays, someone disguised as a life-sized gnome comes on Christmas Eve with a large sack of gifts. Sadly, in many areas the costume of the gift-bringer is changing from a gnome-like outfit to a Santa Claus suit due to merchandising influence from the U.S.

By tradition, Swedes attend church in the very early hours of Christmas morning. In olden days it was a custom to have a race to the church in sleds or wagons or even home from the services.

The winner of the race was believed to have the best harvest the coming year. Otherwise, the day is spent quietly within the family circle, with Christmas parties and get-togethers the following day and on throughout the holidays until Knut's Day.

When King Canute was king of Sweden a thousand years ago he decreed that the Christmas feasting should be twenty days. While some countries observe the Twelve Days of Christmas, another week is added to the celebration in Sweden.