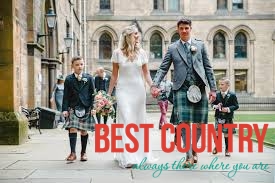 Scotland had always had its own way of doing things, and that includes weddings. Today’s Scottish weddings are a blend of ancient Highland traditions and the more modern, streamlined rights.

Scottish wedding traditions started as far back as the thirteenth century. Back then the medieval church would announce each wedding in church for three successive Sundays. Such announcements were called the “banns of marriage.”

The practice of proclaiming the banns in church lasted for more than six hundred years. Finally the banns gave way to a simple announcement of intent to get married and the obtaining of a marriage license from the local registrar.

Today it is no longer required to proclaim the marriage banns in church for three successive Sundays, but it is still necessary for all couples wishing to marry to give notice of their intent. In this way the ancient forms are still respected – but in a more modern way.

Another ancient custom was called “creeling the bridegroom.” This custom required the bridegroom to carry a large basket (a creel) filled with stones on his back. He had to carry this weight from one end of the village to the next and continuing carrying it around the town until his intended bride would come out of her house and kiss him.

On the day of the wedding virtually the entire village would turn out to form a procession leading the happy couple to the church, where two wedding services were traditionally held.

At the end of the ceremony the bride and groom would exchange rings, the circular ring with no beginning and no end being the symbol of never-ending love, and then the couple would kiss their wedding kiss in front of all their assembled witnesses.

Following the ceremony the entire wedding party would be piped (led by bagpipers) to a relative’s home for a lavish wedding reception/party. Here the pipers would play lively up-beat tunes for hours on end and outdoor feasting and dancing and general merrymaking would begin and often last the entire night.

Traditionally the first dance of the night, customarily a reel, was led by the wedding couple, after which everyone joined in and the festivities went on non-stop.

Finally, when the celebration was over, the new couple were led to their house where the groom, wishing to protect his new bride from the evil spirits that inhabit the thresholds of doors, would lift his new bride’s feet from the ground and carry her across her new threshold and into her new home.

The priest would then bless the new home and would often bless the couple in their wedding bed before they would finally be alone together for the first time as husband and wife.

Today the wedding ceremony is not quite so formal or so ritualistic – but many of today’s traditions still hearken back to the traditions of the past. Usually about a week before the ceremony the mother of the bride will hold a “show of presents” for her daughter.

This corresponds to the bridal shower in other cultures. During the show of presents the female guests bring gifts to help the new couple establish a home of their own. The presents are opened for everyone to see and the bride’s mother serves tea and cakes.

A slightly more raunchy tradition is the groom’s stag party. Just before tying the knot the groom and his male friends go out for a wild night of partying and drinking. Often the groom is so drunk by the end of the evening that he hardly notices that his friends leave him in the street in front of his home, partly or even fully naked, sometimes tied up.

The modern Scottish bride will wear a traditional or contemporary white wedding gown, while the groom dresses in traditional Highland kilt, kilt jacket and sporran.

The couple are either bag piped down the isle or traditional Gaelic hymns are played as they walk to the alter. The Highland Wedding is played at virtually all Scottish weddings.

Once at the alter the couple may choose to recite their vows in ancient Gaelic or to recite them in modern English. Following the vows the groom often pins a strip of his clan’s tartan colors to the bride’s wedding dress to signify that she is now a member of his clan.

Following the ceremony the bride and groom and all their honored guests head to a private home or to a restaurant for a lavish reception feast.

At the typical Scottish reception you can count on the bride and groom being “piped” to the table of honor, where the bride will cut the first slice of wedding cake using a dirk (a long-bladed knife) that is provided to her by the piper. As the bride slices the first piece of wedding cake, custom dictates that her hand is guided by the hand of her new husband.

The wedding reception is filled with music, signing, much drinking and toasting to the health and happiness of the new couple. The celebrations can go on into the wee hours of the morning.

One custom that hasn’t changed for more than 700 years is the custom of the groom carrying his new bride over the threshold of their new home together.

Today’s husband may not be aware that the custom originated to keep evil spirits from entering his wife through her feet, but the custom is performed nonetheless.