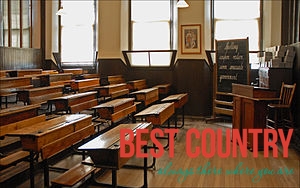 Schools in Scotland are administered by the Scottish Education Department and by local education authorities. For historical and organization information, see GREAT BRITAIN. Elementary and Secondary Schools. In the mid-1980s some 879,000 pupils were attending publicly maintained schools and about 31,900 were in private schools. The transfer from elementary to secondary schools generally takes place at the age of 12. For a discussion on specialized schools, see ENGLAND.

Scotland has about 66 institutions providing programs of study beyond the secondary level for those students who do not go on to the universities. These include colleges of agriculture, art, commerce, and science, and in the mid-1980s the total enrollment was more than 81,000. Teacher-training colleges numbered seven, with approximately 3000 students. Of the eight universities in Scotland, the oldest (University of Aberdeen, University of Edinburgh, University of Glasgow, and University of St. Andrews) were founded in the 15th and 16th centuries. Four universities have received their charters since 1960. Total university enrollment was about 43,100 in the early 1980s.