Food and Drinks in Moldova

Moldova is rich in fertile soil and in hardworking and caring people. Nature is very generous in Moldova, offering plentiful grapes, fruits, vegetables, meat and milk products and cereals, all of which have found their uses in our national food.

The fertile soil and the traditional agricultural methods make possible the cultivation of a diverse range of ecologically pure raw materials.

Moldovan cuisine has had a great influence on the traditional food of the other nationalities that live on this territory.

At the same time some elements have been incorporated from Ukrainian, Bulgarian, Gagauzian and Russian cuisine, as well as elements taken some centuries ago from Greek and Turkish food.

The ingredients used in the traditional meals are: a variety of vegetables like tomatoes, green peppers, aubergines, white cabbage, beans, onions, garlic, etc.

The vegetables are used for salads and sauces; they are baked, pickled, salted, and canned thus becoming a real food art.

The maize and maize flour give a specific color to the traditional meals, like soups, biscuits, flakes, alcohol free drinks, etc. 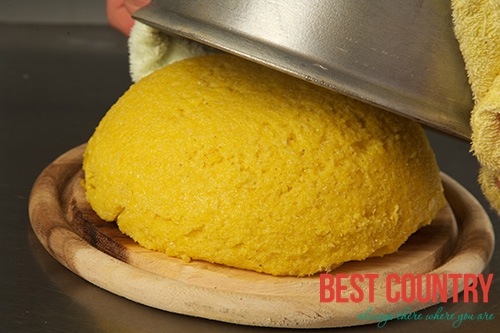 The most common is “mamaliga” – a maize porridge or polenta with a fine and delicious taste. "Mamaliga" is served together with diced meat, cheese, fried meat, cream, etc.

Meat cooked for the first and the second course has a special place in the Moldovan food. The most common are chicken soup, goulash, roast meat, grilled minced meat rolls, etc.

A lot of meat courses are grilled over charcoal. But before the grilling procedure the meat is properly picked.

There is not a holiday without cabbage rolls, meat jelly, noodles, etc. The traditional table is not complete without biscuits, pies, cake dipped in syrup and fruit. 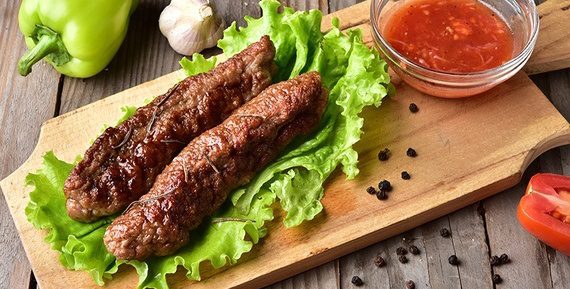 In different parts of Moldova there are local cuisines.

In the East the Ukrainians prefer borsch, in the south the Bulgarians can offer a delicious chicken sauce – mangea, and the Gagauzians may serve you şorpa – a spicy ram soup, and the Russians will offer you their traditional pelmeni – a kind of roll stuffed with meat.

The Moldovan cuisine is served with a variety of traditional drinks: stewed fruits, juices, as well as alcoholic drinks like: wine, brandy, "tuica" – plum brandy, etc.

Wine growing in Moldova is a century-old tradition. The famous Moldovan wines are well known and appreciated at home and far beyond the country borders.

The wines can be dry, sweet and strong, they have a varied bouquet of flavours and colours. For wine producing European vines are used such as: Sauvignon, Cabernet, Muscat, etc., as well as Moldovan varieties: Feteasca, Black Rara, Moldova, etc.

Wine tastings are offered in most Moldovan cellars.