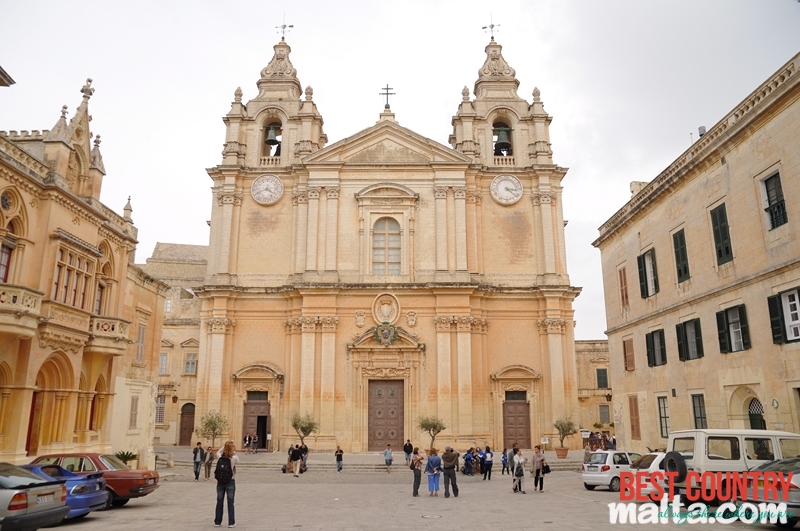 The Constitution of Malta declares Roman Catholicism as the state religion although entrenched provisions for the freedom of religion are made. Freedom House and the World Factbook report that 98% of the population is Roman Catholic, making the nation one of the most Catholic countries in the world.

There are more than 360 churches in Malta, Gozo, and Comino, or one church for every 1,000 residents.

The parish church (Maltese: "il-parroċċa", or "il-knisja parrokjali") is the architectural and geographic focal point of every Maltese town and village, and its main source of civic pride.

This civic pride manifests itself in spectacular fashion during the local village festas, which mark the day of the patron saint of each parish with marching bands, religious processions, special Masses, fireworks (especially petards), and other festivities.

Malta is an Apostolic See; the Acts of the Apostles tells of how Christians believe St. Paul, on his way from Crete to Rome to face trial, was shipwrecked on the island of "Melite", which many Bible scholars identify with Malta, an episode dated around AD 60.

The Acts of the Apostles says St. Paul spent three months on the island, curing the sick including the father of Publius, the "chief man of the island". Various traditions are associated with this account.

The shipwreck is said to have occurred in the place today known as St Paul's Bay. Saint Publius is said to have been made Malta's first bishop and a grotto in Rabat, now known as "St Paul's Grotto" (and in the vicinity of which evidence of Christian burials and rituals from the 3rd century AD has been found), is amongst the earliest known places of Christian worship on the island.

Further evidence of Christian practices and beliefs during the period of Roman persecution appears in catacombs that lie beneath various sites around Malta, including St Paul's Catacombs and St Agatha's Catacombs in Rabat, just outside the walls of Mdina.

The latter, in particular, were beautifully frescoed between 1200 and 1480, although marauding Turks defaced many of them in the 1550s. There are also a number of cave churches, including the grotto at Mellieħa, which is a Shrine of the Nativity of Our Lady where, according to legend, St. Luke painted a picture of the Madonna. It has been a place of pilgrimage since medieval times.

The Acts of the Council of Chalcedon record that in 451 AD, a certain Acacius was Bishop of Malta (Melitenus Episcopus). It is also known that in 501 AD, a certain Constantinus, Episcopus Melitenensis, was present at the Fifth Ecumenical Council.

In 588 AD, Pope Gregory I deposed Tucillus, Miletinae civitatis episcopus, and the clergy and people of Malta elected his successor Trajan in 599 AD. The last recorded Bishop of Malta before the invasion of the Islands was a Greek by the name of Manas, who was subsequently incarcerated at Palermo.

Maltese historian, Giovanni Francesco Abela, states that following their conversion to Christianity at the hand of St. Paul, the Maltese retained their Christian religion, despite the Fatimid invasion.[100] Abela's writings describe Malta as a divinely ordained "bulwark of Christian, European civilization against the spread of Mediterranean Islam".

The native Christian community that welcomed Roger I of Sicily was further bolstered by immigration to Malta from Italy, in the 12th and 13th centuries.

For centuries, the Church in Malta was subordinate to the Diocese of Palermo, except when it was under Charles of Anjou, who appointed bishops for Malta, as did – on rare occasions – the Spanish and later, the Knights.

Since 1808 all bishops of Malta have been Maltese. As a result of the Norman and Spanish periods, and the rule of the Knights, Malta became the devout Catholic nation that it is today.

It is worth noting that the Office of the Inquisitor of Malta had a very long tenure on the island following its establishment in 1530: the last Inquisitor departed from the Islands in 1798, after the Knights capitulated to the forces of Napoleon Bonaparte.

During the period of the Republic of Venice, several Maltese families emigrated to Corfu. Their descendants account for about two-thirds of the community of some 4000 Catholics that now live on that island.

Also, a number of Maltese individuals are recognised as Blessed, including Maria Adeodata Pisani and Nazju Falzon, with Pope John Paul II having beatified them in 2001.

Various Roman Catholic religious orders are present in Malta, including the Jesuits, Franciscans, Dominicans and Little Sisters of the Poor.

Most congregants of the local Protestant churches are not Maltese; their congregations draw on the many British retirees living in the country and vacationers from many other nations.

There are approximately 500 Jehovah's Witnesses; The Church of Jesus Christ of Latter-day Saints (Mormons), the Bible Baptist Church, and the Fellowship of Evangelical Churches have about 60 affiliates.

There are also some churches of other denominations, such as St. Andrew's Scots Church in Valletta (a joint Presbyterian and Methodist congregation) and St Paul's Anglican Cathedral, as well as a Seventh-day Adventist church in Birkirkara.

The Jewish population of Malta reached its peak in the Middle Ages under Norman rule. In 1479, Malta and Sicily came under Aragonese rule and the Alhambra Decree of 1492 forced all Jews to leave the country, permitting them to take with them only a few of their belongings.

Several dozen Maltese Jews may have converted to Christianity at the time in order to remain in the country. Today, there isone Jewish congregation.

Zen Buddhism and the Bahá'í Faith claim some 40 members. There is one Muslim mosque.

A Muslim primary school recently opened; its existence remains a point of some controversy. Of the estimated 3,000 Muslims in Malta, approximately 2,250 are foreigners, approximately 600 are naturalized citizens, and approximately 150 are native-born Maltese.