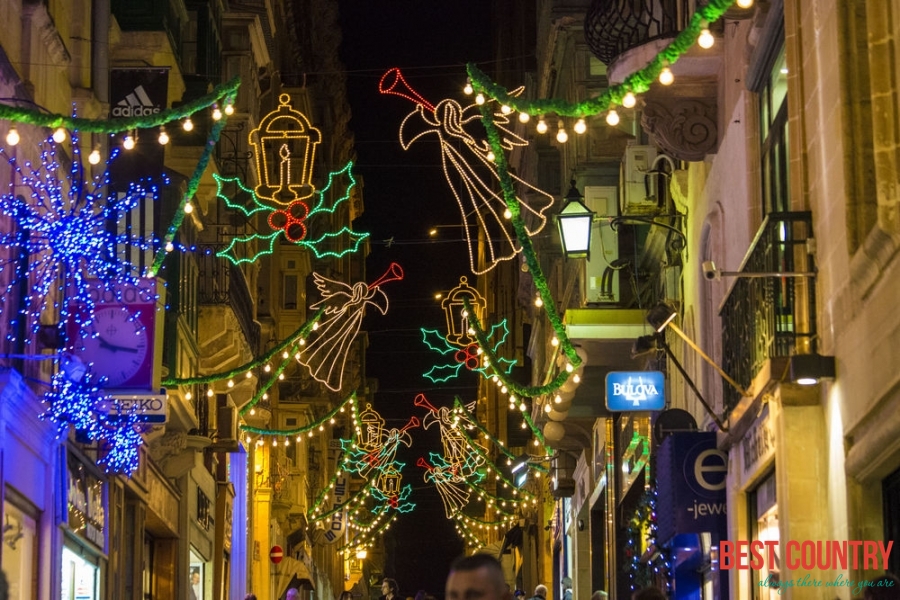 In Malta, Christmas is known as "Il-Milied" and celebrated on December 25.

Here, the festival is traditionally centered on 'Presepju' or Nativity cribs.

During Christmastime in Malta, cribs are built almost everywhere and by everyone. These are then decorated with figurines, called 'pasturi'.

The 'pasturi' figures represent Jesus, Mary, and Joseph, the shepherds, angels, villagers and animals such as cows, donkeys and sheep. Thereupon, these are surrounded by lights and plants.

On December 24, Maltese churches are decorated with lights and nativity cribs built by church goers.

The figure of the baby Jesus is placed on the main altar at the midnight hour of Christmas night, commemorating the birth of the messiah. At Epiphany it is traditional the figures of the ThreeMagi are also placed in the crib.

A Maltese group known as 'Friends of the Crib' see to it that the crib tradition remains alive. Small-sized cribs called "grolta" are a favourite of children. Modern cribs are now often mechanical and the figures in them can even move! These days, the "pasturi" figures are also often made of plastic.

The tradition of displaying cribs first began in 1617, when the first true Maltese crib is believed to have been made and displayed in the Domenican Friars Church in Rabat.

Since then, the custom has gained its ground and gone from strength to strength. In 1921, the renowned priest George Preca organized a Christmas Eve procession with a life size figure of the Infant Jesus being carried at the front.

The idea became very popular with people of all ages and this is how the very special Maltese traditional Christmas procession started. The custom is hugely popular even today and form an integral part of the Christmas Eve celebrations.

As in elsewhere, every home in Malta has its own Christmas Tree which are decorated with light bulbs, tinsel and other items of embellishment. The interior of every house is adorned with Christmas wreaths, candles and all sorts of other decorations.

The 'Presepju' with 'pasturi' can also be found in Maltese houses during Christmas. Large figures of the baby Jesus are sometimes put behind windows or in balconies and surrounded by brilliant Christmas lights. If ever you go to Malta, go during Christmastime to behold this splendid spectacle.

It is traditional to sow wheat, grain and canary seed, 'gulbiena', on cotton buds in dark corners in the house. These are sown five weeks before Christmas and left undisturbed. At about Christmas Day, white grass-like shoots sprout from the seeds. These are then used to decorate the crib or the statue of Baby Jesus.

On Christmas Eve, a procession with the Baby Jesus is held. This is followed by the Midnight Mass Service which is attended by most of the Maltese population, who are Catholics. The mass begins with choirs singing carols in Maltese.

A highlight of the mass is the telling of a story of the nativity in the form of a sermon by a boy or a girl, normally aged 7 to 10 years old, instead of the priest.

The Mass is the climax of all religious activities. After Mass it is customary to greet "Il-Milied It-Taijeb" (Merry Christmas), to all those assembled.

Christmas Day in Malta is a time to celebrate with family. It is an occassion for family reunion.

All extended members of a family assemble in one house for lunch and stay there till the evening.