Religion in the Republic of Macedonia 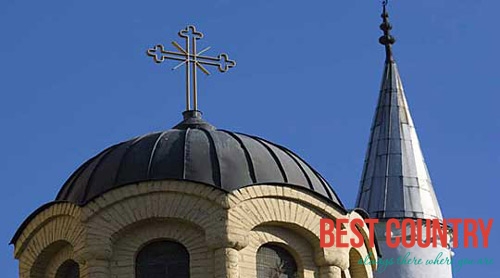 In the Republic of Macedonia, the most common religion is Orthodox Christianity. Muslims are the second-largest religious group with almost one-third of the population adhering to Islam. There are also many other religious groups in Macedonia, including Catholicism, Baptism, Protestantism, Hinduism and Judaism.

The exarchate was dissolved in 1924. In 2001 the Holy See re-established the Apostolic Exarchate of Macedonia. Currently, members of the Macedonian Catholic Church number about 11,400.

There are a number of Protestants in Macedonia. In the late 19th and early 20th centuries, American missionaries converted villages in the Strumica-Petrich region to Methodism, a faith still practiced. There is also a small community of Macedonian Baptists which has existed since 1928.

The Serbian Orthodox Church operates among the Serbians in Macedonia's North. The number of adherents corresponds with the number of Serbs at 36,000.

Islam has had a significant influence in Macedonia since the Ottoman invasions in the 14th and 15th centuries.

Many Turks settled in Macedonia and introduced aspects of Islamic culture. This is most prominent in the cities of Bitola, Skopje and Tetovo.

Many Macedonians and most Albanians converted to Islam, these Macedonian Muslims or Torbeshi generally retained their Macedonian Culture and Customs while many were assimilated as Turks.

By the 19th most of the cities were primarily populated by Muslims. The painted mosue in Tetovo is a legacy of the country's Ottoman past. Macedonia's Muslim population was approximately 600,000 in 2002.

Today, Muslims form approximately 32% of the nation's total population.It has the fourth largest Muslim population in Europe by percentage after Kosovo (90%), Albania (70%),[8][9][10] and Bosnia-Herzegovina (47%).

Today, the Jewish community of Macedonia numbers some 200 people. Almost all live in Skopje, with one family in Štip and a single Jew remaining in Bitola.