Macedonians are big gourmands. The Macedonian cuisine, is a representative of the cuisine of the Balkans, reflecting Turkish, Greek and Middle Eastern influences and to a lesser extent Italian, Mediterranean and Hungarian ones. The relatively warm climate provides excellent growth conditions for a variety of vegetables, herbs and fruits. Thus, Macedonian cuisine is particularly diverse. 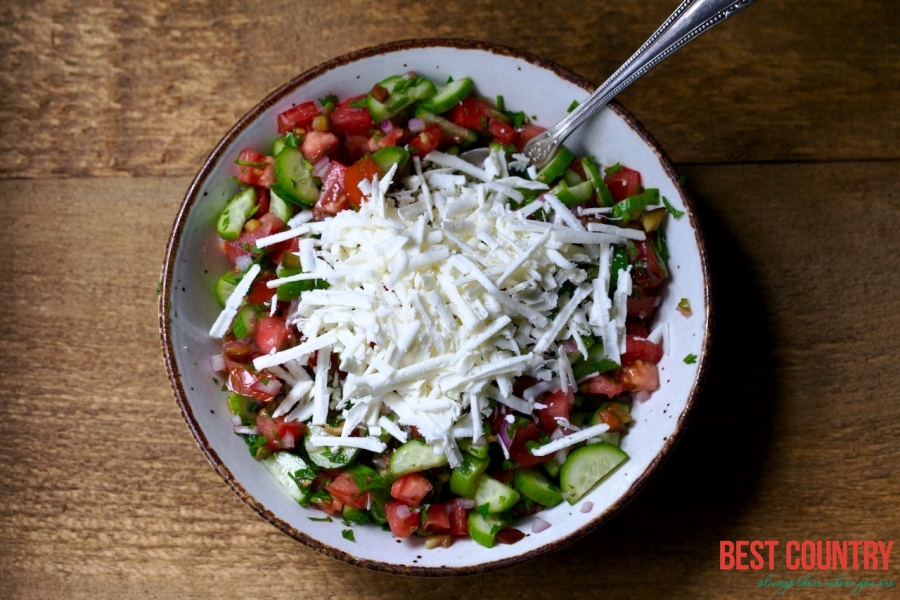 Famous for its rich Shopska salad (diced tomatoes, cucumbers, onion, & white cheese), required at every meal, Macedonian cuisine is also noted for the diversity and quality of its dairy products, wines, and local alcoholic beverages, such as rakija and mastika. The Macedonian cuisine uses many spices; but usual in very small quantity.

Tavche Gravche (beans in a skillet) is a traditional dish. The boiled beans first and then mixed with onion, peppers, tomato, oil, flour and various spices baked in a pottery saucepan.

Ajvar (ayvar) is a relish made principally from red bell peppers, with eggplant, garlic and chilli pepper. It's traditionally homemade all over the country at the beginning of the fall. Ajvar can be consumed as a bread spread, in sandwiches, a condiment, or a salad.

Kaskaval is a specific type of yellow sheep's milk cheese; in Macedonia the term is often used to refer to all yellow cheeses (or even any cheese besides Sirenje-white cheese).

Kacamak is a traditional dish made of corn flour, potato and, sometimes, feta cheese. Similar to the Italian polenta, it is prepared by boiling the mixture thick or rare depending on taste, and then mashing while the pot is still on the fire. It is usually served with milk, plain Yogurt, sour cream or sometimes with bacon.

Moussaka (Musaka) is a traditional eggplant - based dish in the Balkans and the Middle East. The Macedonian variant of it, traditionally consists couple of layers of ground (minced) lamb or red meat, sliced eggplant and potato (optional ingredients include: tomato, green peppers).

Burek is a type of pie popular throughout the former Ottoman Empire. In Macedonia, burek is made from layers of thick dough, alternating with layers of other fillings in a circular baking pan and topped with a layer of dough.

Fillings are stewed ground meat, white cheese, spinach, and the modern variants - pizza & chicken burek. Burek without filling is also made, and it’s known as Simit Pogacha when served into a roll.

Sarma is the name of a minced meat (usually beef, pork, veal, rice, onions, and various spices, including salt, pepper and various local herbs are mixed together and then rolled into large plant leaves of grape or cabbage.

The food from the grill (local: skara) - Macedonians and the rest Balkan nations are known as great lovers of the grill; especially the tasty “kjebapchinja” and grilled meat patty which go excellently with onion. Those are two most popular meals with younger and older population and they are found in the offer of many taverns.